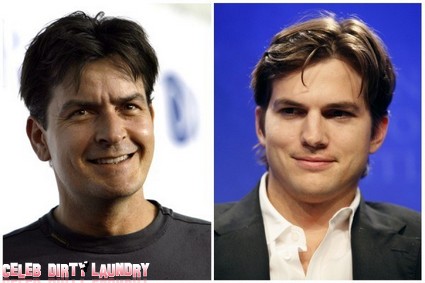 A major league back flip from Charlie Sheen today. He’s apologized for  slamming his replacement on Two And A Half Men. The outspoken bad boy has actually said sorry for some nasty remarks he made about Ashton Kutcher.

According to TMZ Charlie feels bad about sticking the knife into a one time mate. He realises now he should have thought things through before he opened his big mouth. It wouldn’t be the first time that’s happened. So he’s drafted a letter to his successor on the once popular sitcom..and it goes like this…’Dear Ashton, My bad. I was disrespectful to a man doing his best. I got excited and I threw you into the crossfire, but the rest of statement I stand behind. You however, deserve better. Safety in your travels good sir. CS.’ Short, but sweet.

So Charlie isn’t sorry for bad-mouthing Ash but he doesn’t suck. He still reckons the sitcom he once starred in is now a sad shadow if it’s former self. Well – we’d have to agree with you there Mr Sheen. It ain’t the same without Charlie Harper. Your bowling shirts are sadly missed.