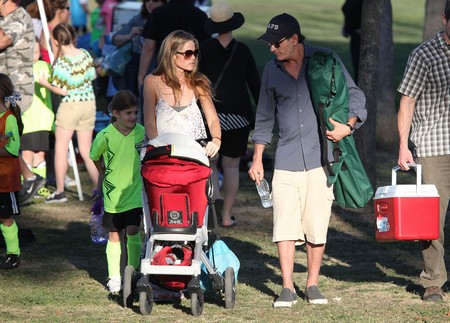 Looks like there is no chance left for Charlie Sheen and Denise Richards as she and Richie Sambora are back together.  Denise and Charlie enjoyed family style vacations together over the winter with their kids and it appeared that the two might wind up back together on a permanent basis.

It seemed that Denise was the only one for Charlie: “She’s the only girl who can deal with Charlie and who has come close to handling him — as much as anyone can handle Charlie,” said a longtime friend of Denise at the time.

But that was then and this is now… The 41-year-old Denise accompanied Richie to the Midnight Mission’s Golden Heart Awards at the Beverly Wilshire Hotel Monday night where he was honoured for his work with the Los Angeles-based homeless support and advocacy group.

Richie was also accompanied to the event by Ava, his 14-year-old daughter and ex-wife Heather Locklear – said: “We’re back on. It’s all good.”

Denise has three daughters, Sam, seven, and six-year-old Lola, with ex-husband Charlie, and adopted 10-month-old Eloise appeared delighted to be giving her support to Richie because she is so proud of his efforts to help the homeless.

Denise said: “This is a big night for Richie, so I’m here to support him. It’s really important work that he does.“

I was hoping that Charlie and Denise were going to get back together.  No matter how bad Charlie’s behavior got during the craziest episodes of his long battle with crack addiction Denise always maintained a dignified stance.  Let us know what you think in the comments below.