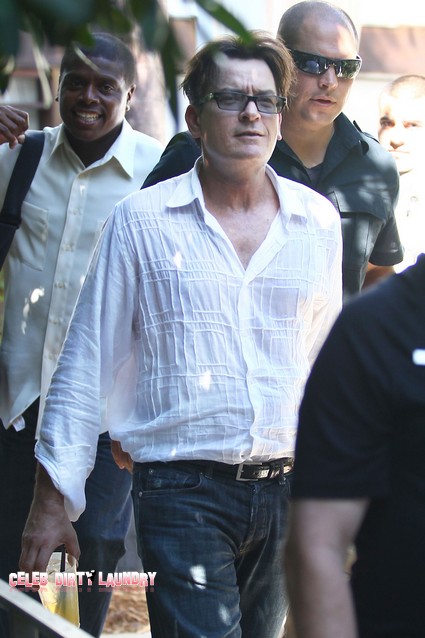 Charlie Sheen thinks that ‘Two and a Half Men’ is no longer a good show and should be cancelled. Charlie but the bulk of the blame on his nemesis, Chuck Lorre, for the shows failure to be entertaining. He managed to include a swipe at Ashton Kutcher as well saying his replacement on the show is doing ‘the best he job he can.’

Charlie was sacked from the sitcom last year because of his erratic behaviour and public criticisms of creator Lorre – thinks Ashton Kutcher and the rest of the cast are being given substandard material to work with and says they “deserve” better.

Referring to the show Charlie said: “I don’t think it should go on past this year. I just think that people are there because there’s nowhere else to go. Yet.”

“Hats off to Ashton for doing the best job that he can. I don’t think that he’s working with the best writing because [Lorre is] doing too many shows. He and [Jon Cryer] and [Angus T. Jones] deserve better material.”

Despite his comments, Charlie – who is now working on a new comedy show, ‘Anger Management’ – insists he doesn’t care what happens to the show because he has moved on and now feels “free.”

He added to The Hollywood Reporter: “I don’t want to harp on them. Let the clueless stay clueless. I was a puppet there for ratings. But whatever, I don’t care. I’ve moved on, and whatever they’re doing there is none of my business.”

He may be disappointed with the quality of ‘Two and a Half Men’, but Charlie promised fans will love his new show.

He said: “We will not disappoint. At this stage of the game, to deliver a turd? It’s not going to happen.  It’s going to be an absolute f**king rocket ship to the moon.”

Charlie’s new show simply can’t be worse than ‘Two and a Half Men’ is without him.