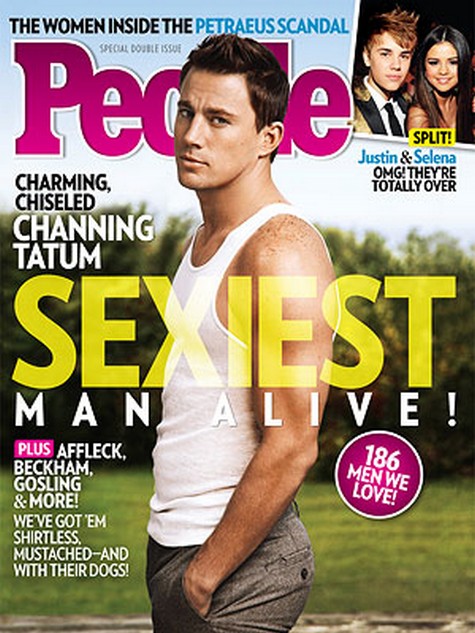 It’s that time of year again- you know the one that all women especially look forward too!  People Magazine has just named its Sexiest Man Alive and I think a multitude of women will agree with this years selection- Channing Tatum.  The star shot to fame after first starring in the dance flick, Step Up and that role also introduced him to his now-wife, Jenna Dewan-Tatum.   Channing was stunned to be chosen by People saying,  “My first thought was, ‘Y’all are messing with me. I told Jenna after we’d been in the bathtub washing our dogs because they’d gotten skunked.  She calls me [the Sexiest Man Alive] now.”

His wife Jenna isn’t too shocked by the honor. She knows exactly the kind of married as she gushes,“People know him to be fun and sexy, but they don’t know how emotionally deep and spiritually open he is, he is such an openhearted person; what you see is what you get.”  The couple has been married since 2009 and according to Channing, babies aren’t too far off in the future. He thinks they are both about ready to start a family. Can you imagine how gorgeous those kids will be?

Channing Obviously workssuper  hard to keep that uber hot body and is in heavy duty training to play an Olympic athlete in next years’ Foxcatcher film. About his training he tells People,  “I like to be lean. If I get too bulky I can’t move well and I like to move. When I’m not training, I get really round and soft.”

Channing isn’t the only man featured in the latest issue of People. There are 186-pages of smoking hot men to be ogled so I’d suggest you grab a copy quick!