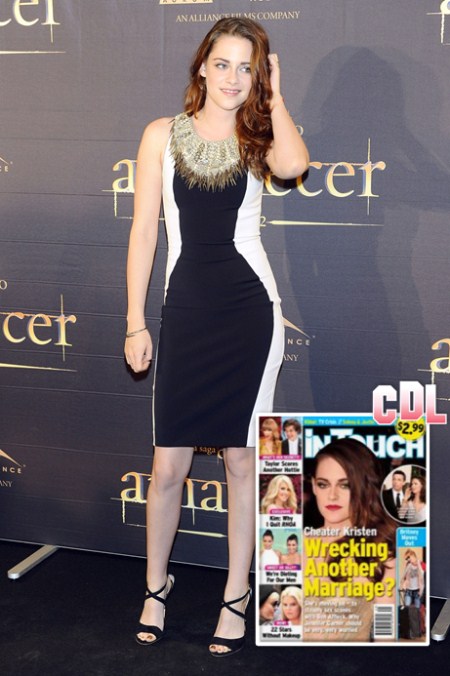 The latest cover of In Touch weekly shows the splendid and maudlin face of Kristen Stewart, with a tagline that reads, “Cheater Kristen Wrecking Another Marriage”.  In Touch reveals in the latest issue why Kristen is (once again) wrecking another home, but this time around it isn’t Rupert Sanders, it’s another director who goes by the name of Ben Affleck.  The crazy faced Stewart will be starring in the upcoming Affleck film called “Focus”, and In Touch exclusively obtained the script of the film. According to the magazine, “The film tells the story of a veteran grifter (the part Ben would play) who takes a young, attractive woman (the part Kristen would play) under his wing. But things get complicated when they become romantically involved. And the script reveals that there’s no shortage of steamy moments between the two characters. The role Kristen would play has a nude scene, and the lead characters have makeup sex after a huge fight.”

The script reads like a good Fifty Shades of Grey novel, “Looking up at the man in front of her, the young woman whispers, ‘Just kiss me.’ He lowers his lips to hers, her back pressed against the hotel room door. After fumbling for the lock, the pair stumble through the hallway to the bedroom, never breaking their embrace. They fall onto the bed in a tangle of limbs.” Juicy stuff if you ask us!

A little insert on the right-hand side of the cover shows Britney Spears with a suitcase in her hand. Her tagline reads, “Britney Spears Moves Out.” Could this be the end of Spears and her fiancée manager Jason Trawick? We know her relationships have never really panned out like they should have so could this new, much hyped relationship also be on the curvy rocks of demise? The Taylor Swift/Harry Styles story is in the upper-left corner with the tagline, “Taylor Swift Scores Another Hottie.” We reported here on Celeb Dirty Laundry in recent days that Swift is on the One Direction manhunt after breaking up with that Kennedy kid, but the Swift singer has been receiving death threats from enraged One Direction fans, so could this story actually have any validity to it? Below the sordid faces of Harry and Taylor is a Real Housewives of Atlanta story that no one really cares about (seriously, who still gives a flying freak about these wealthy women and their sad lives?)

And finally, in the bottom left corner we have “22 Stars Without Makeup”, which is always a great story when you feel ugly and bloated on a Monday. There’s nothing like watching Miley Cyrus be as ugly as a war when you wake up in the morning and look at your tousled hair in the mirror.

For more stories and more celeb scandals, head down to your supermarket in sweatpants and pick up the latest In Touch issue for only $2.99! Trust us; your life will never be the same again.