Childless Khloe Kardashian Is Desperate For A Baby Bump 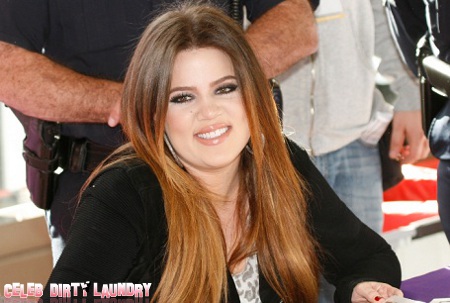 Childless Khloe Kardashian hasn’t been the luckiest Kardashian when it comes to conception, but with luck on her side or not, she’s desperate for a baby bump and won’t let nature stand in her way! Khloe has been living the high life as Hollywood royalty, so it is only normal for her to imagine a life filled with the tiny pitter patter of baby feet and the long nightly routines of changing diapers.

Reality Weekly recently revealed that Khloe is yearning for a baby to call her own and is trying to conceive with every ounce of her Kardashian power. Her maternal instinct is growing by the day, as her sister Kourtney’s stomach extends ever so further.

Khloe, unfortunately, has some other troubles to deal with, which include her failing marriage with unemployed basketball player Lamar Odom. An insider revealed to Reality Weekly, “Khloe needs to focus on her relationship with Lamar or else there won’t be a relationship left at all. She and Lamar have been fighting constantly about everything lately. She is still adamant that they are soulmates and are meant to stay together forever, but she is also admitting that the marriage is at an all time low for them.”

Khloe and Lamar have been married since September of 2009 and currently have their own reality show, Khloe and Lamar. Rumors have been circulating on the internet since the beginning of 2012 that their marriage is on the rocks and that all baby plans are being put aside. Many sources claim this allegation is untrue and that they are, in fact, still happily married. We all know in the world of gossip that every spiral of smoke has a massive fire raging underneath and that usually these stories tend to be true.

Khloe has been yearning for a child and the media has been watching closely for a small bump on her stomach, but no flags have been raised. Khloe remains without baby and might soon be without husband.

Whatever the case may be, CDL will deliver you the news (positive or negative, get it?) as soon as the proverbial water breaks (water breaking? Get it?).