Chinese Actress Had Sex With Businessmen For Over $100 Million 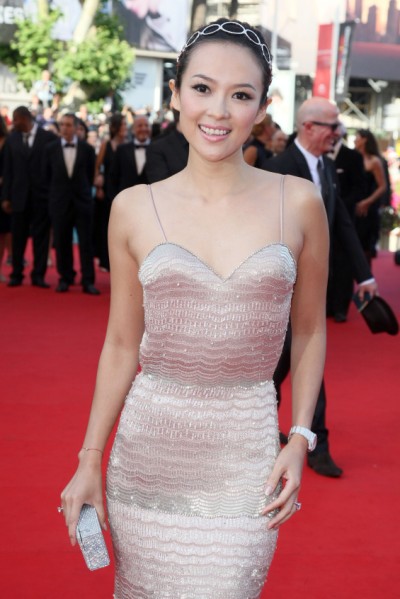 Chinese actress, Zhang Ziyi, is crouching in sadness and hiding in shame after being excused of having sex with high-powered Chinese businessmen for over $100 million.

Allegedly (and ironically), the star of Memoirs of a Geisha is believed to have had sex with disgraced politician, Bo Xilai, more than 10 times since 2007, Boxun claimed. She was paid $1.59 million by Mr. Bo for each booty call. Side note: Who negotiated those numbers? I could see her asking for $1 million by when does the $.59 million enter the negotiating table?

Anyway, Ziyi met Mr. Bo though Xu Ming, another Chinese businessman being investigated for shady dealings. Naturally, Xu Ming tried out the merchandise before he passed Ziyi along. He paid $100,000 the first time to have sex with Ziyi and she made $28.7 million off the obscenely rich douchebag all together. That either means they had lots of sex or she realized he was underpaying. Good for her for knowing her worth! Women out there, take note!

Apparently there have been other dudes and Ziyi’s got out of claiming the money on her taxes because all her powerful Johns took care of it for her. Ziyi’s publicist is denying the accusations (no shit) saying, “It sent stone-cold chills down our spines and has left us with a feeling of deep sadness. Why should this devoted and responsible actress have to suffer this kind of slander and defamation?”

Because she likes the monies! Seriously though, this chick has the most innocent, sweetest face in the world. You just imagine  her playing with baby bunnies all day, not with old, gross dudes’ penises. But times are tough out there. You got to do what you got to do to make a living. Some people’s livings just require A LOT more money and A LOT less self esteem.

As Nene Leaks would so eloquently ask – Do you think Ziyi is being a trashy hooker and opening her legs to married men?