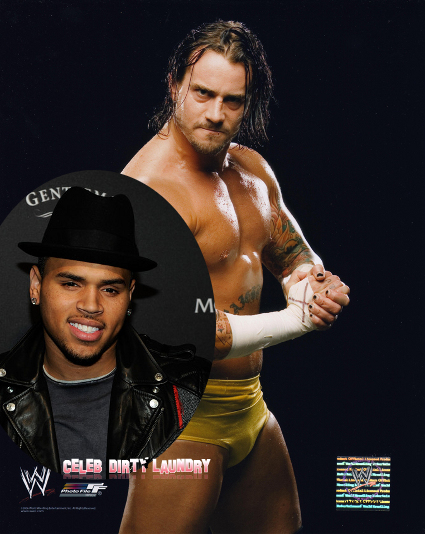 There’s another celebrity Twitter war brewing, and this time it’s involving the quick-to-anger Chris Brown and WWE star CM Punk. It all started a few days ago when CM Punk randomly (and we do mean randomly) sent out a tweet saying he’d like to “curb stomp” Chris at an upcoming event so he “could fight somebody that can defend themselves.”

Now, I’m not a big fan of Chris, so I find the aforementioned verbal assault quite pleasing . . . but CDL doesn’t play favorites (okay, so we might a little), so don’t let our biases influence your love or hatred for the R&B star.

After Brown became aware of Punk’s tweet, he was quick to respond with a very low blow (pun intended):

“@CMpunk needs more followers. He’s such a leader! Not to mention the roids hes on has made it utterly impossible for him pleasure a women.”

Brown later added: “@CMpunk contact my assistant and I’ll have em send u an autographed pic for my biggest FAN!!!”

*Sigh* Chris Brown, I think you should find another way to restore you image. This. Isn’t. Working. We do understand that Punk’s comment was unnecessary, and childish in and of itself, but perhaps you could have let it slide?

Punk has yet to respond to Chris Brown’s tweet. It would be best if he put on his big boy pants and forgot about it, but something tells me Punk isn’t going to stay silent for long.

What do you think of this latest celeb Twitter war? Do you like Twitter wars? I think they’re enthralling! Does that make me a bad person?