Chris Mann Eliminated From ‘The Voice’ 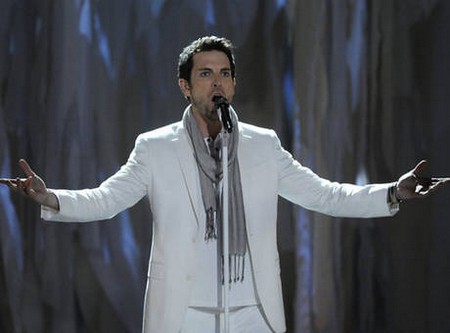 Chris Mann, 30 years old from Wichita, Kansas has been bringing his “operatic wonder” sound to ‘The Voice’ and people have even compared him to Josh Grobin and Michael Bublé. The thing is, with opera, you either love it or hate it, and based on Chris making it to the final four, I would say America loves it! But, sadly it wasn’t enough for him to make it through to winning the competition.

Chris’s strong, bold voice belted out “Ave Maria” last week. Did you see the performance? If you missed it or just want to see it again, you can watch the video HERE.

Cee Lo thought the performance was “the epitome of this show” while Christina felt, “the heavens open up just now.”

When it came down to her final two, Christina did not persuade the vote like Cee Lo did, she let America vote for the finalist and they chose Chris, but no surprise to me because he is truly one of the best voices in both ‘Voice’ competitions.

Even Grammy Award winning, David Foster was rooting for Chris, he said “There is nothing that Chris Mann cannot sing. From the smoothest notes to the hardest runs, he can do it effortlessly. One of my favorite male singers today. A producer’s dream to work with.”

Prior to joining ‘The Voice’ Chris was already was well and busy with his music career. He has worked with top producers, has performed at high profile events; the Sundance Film Festival, the Academy Awards Young Hollywood Party, the American Film Institute Awards and the Bel-Air Film . Chris has also done some voice acting, he was featured in Avatar, Glee 3D, Letters to Juliet, Tangled, Sex and the City 2, The Smurfs (wonder which one he was?), 2012 and The Philanthropist. If that wasn’t enough, Chris is apparently now recording his debut full-length album due out in 2012.

Nobody can argue that Chris Mann is a talented guy, do you think he deserved to be sent home? Or, should he have won? Sound off your comments below and let us know how you feel about Chris’ ‘The Voice’ experience.