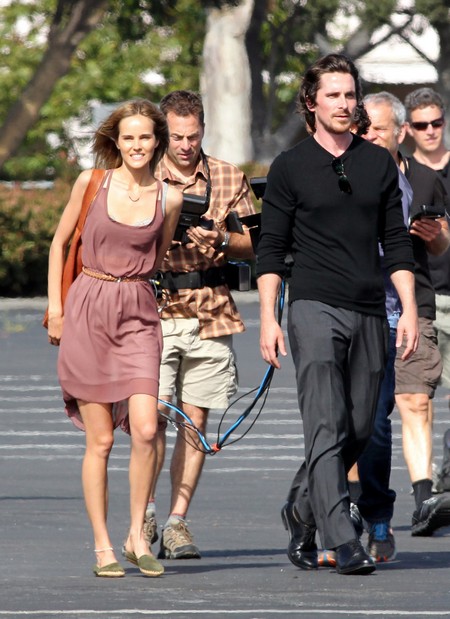 Oh to be in the shoes of Australian actress Isabel Lucas! She is the luckiest lady who has recently gotten to work with the always-handsome (despite his sometimes angry temper) Christian Bale.

The two have recently begun filming their upcoming drama, Knight of Cups – and while the storyline is being kept under wraps, cameras spotted the two getting along quite happily on set this weekend.

The film is being shot in L.A, and while in between breaks both Christian, looking dapper in a black long sleeve shirt and grey dress pants (Christian + ‘grey’ = 50 Shades??) while 27-year-old Isabel looked cute in a soft pink sundress.

The film, directed by Terrence Malick, is described as the tale ‘of a man in search of love and truth’. Sounds right up my alley! And don’t the two of them look like a cute couple? No word on their relationship status within the film, but the chemistry shown in these pap pics is that of ease and friendship.

Bale has had his good fortune to work with a slew of leading ladies recently who are all also in the film: Freida Pinto, Cate Blanchett and Natalie Portman. And let’s not forget about his recent collaboration with Anne Hathaway in the Dark Knight Rises, she’s no slouch herself.

So who’s the lucky lady to win his heart? Well we’ll just have to wait and see until the movie is finished filming and hits theaters some time next year.