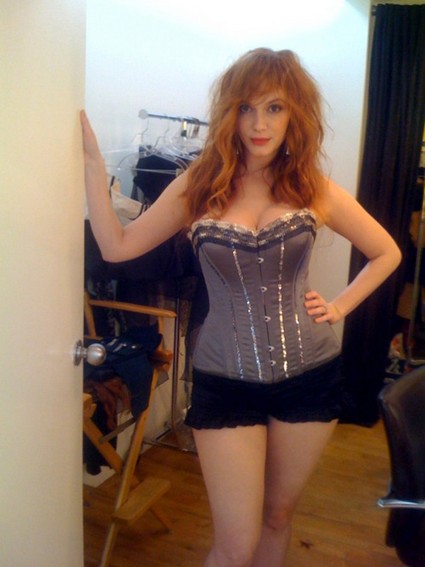 Christina Hendricks’ cell phone was hacked but the topless photos that appeared online on certain bottom-sucking websites are NOT hers.  Unlike the famous Scarlett Johansson cell phone hack that resulted in real private pics of ScarJo – leaked nudes in fact – winding up all over the net, this is much ado about nothing.   Or almost nothing… .  Of course there are photos of Christina that are legit and fairly revealing but the bare breasted shot is certainly not of her.

Christina’s rep replied to questions and said that Christina’s phone was hacked recently and multiple self-shots were stolen but the bare breast shot is not of his client.  We believe the rep since we have seen the photos and the breasts in the bare shot look too SMALL to be hers.  This is a different case than Olivia Munn – her personal nude pics released today are real!

Apparently legal authorities are investigating the cell phone hack and will soon bring the creep who invaded Christina’s privacy to justice.  Of course we have to ask: why do celebs insist on putting personal revealing pics on their electronic devices?  They know that doing so puts them at risk of supposedly unwanted exposure… or is the exposure really unwanted?

TMZ busts out another exclusive: Busy day in the world of naked photo leaks … just hours after Olivia Munn‘s allegedly naked body hit the web, a set of pics has surfaced online showing what appears to be a topless Christina Hendricks … but Hendricks’ rep insists, the breasts aren’t hers.

But the rep insists, the one topless picture — purportedly showing the actress’ bare ample bosom — is NOT Christina. It’s an impostor.

Christina’s rep tells TMZ, she doesn’t know who hacked her phone — but the proper authorities have been notified and an investigation is underway.