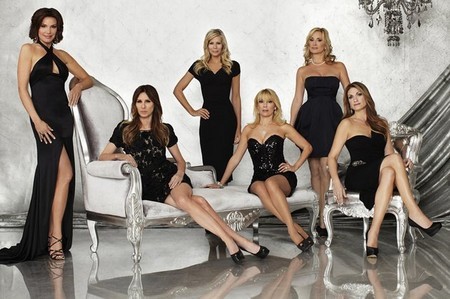 Earlier today, Bravo released an explosive clip of what’s yet to come this season on The Real Housewives of New York City. Just when  some thought things were getting a bit boring, they released this scandalous clip, full of upcoming Housewives drama! The clip below features footage of the Housewives’s trip to St. Barthes and a lot of previously unseen footage of conflicts and drama between the women, which People magazine referred to as “Scary Island Redux,” referring to former Housewife Kelly Bensimone‘s infamous mental breakdown (although, if you ask Kelly, it was a “breakthrough”).

We see Heather Thompson in more conflict. “Take your ungrateful ass and get out of my face,” Heather tells her shocked co-star, Sonja Morgan.

We see Heather tell a couple other Housewives that co-star LuAnn de Lesseps came into their hotel room with a man, which LuAnn denies.

Apparently, it all started when Aviva brought her husband along with her to St. Barthes on what was supposed to be a ladies-only vacation. That being said, the rest of the cast did not exactly greet her with open arms, which apparently angered Aviva.

In the trailer below, we see an already-seen clip of Aviva calling fellow cast mates Sonja and Ramona Singer “white trash.”

We also see the an already-seen clip of Sonja telling Aviva she is a “piece of work!”

What we had not seen until today was Aviva telling Sonja, “I find having somebody in front of me on a spiral downward so sad to watch,” though it is unclear if she is talking about Sonja or about someone else, though from the look on Sonja’s face, it appears that she may be referring to Sonja.

Another time, we see Aviva meeting with Ramona for another confrontation. “You and Sonja were naked in bed,” a disgusted Aviva says in this previously unseen clip.

“What is your problem?” asks a baffled Ramona.

“You are my problem,” Aviva fires back cooly.

Next, we see Aviva angry with Sonja because she did not come to her fundraising event for children who are missing their legs.

Then Aviva goes after Ramona’s husband, Mario Singer. “Don’t turn your back on me you wimp!” she says. “Shame on your wife!”

What do you think, readers? Are you excited for the drama?