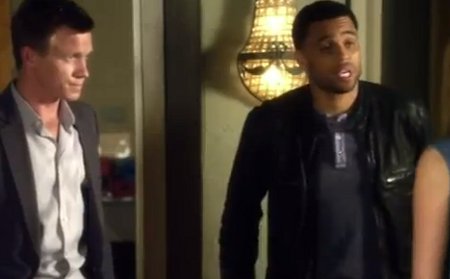 The season 1 finale of the USA network’s hit show Common Law airs this Friday (8/10/12) and we’re just going to tell you up front that — if you’re a fan of the show at all — it’s definitely a good one, one you won’t want to miss. In the last episode of the season, which is titled “Gun,” Wes and Travis try their hardest to finagle their way back into the good graces of Dr. Ryan by finally fulfilling what they were sent to her to do in the first place: open up.

The last episode, which we were lucky enough to review for you all, is a perfect capstone to an otherwise intriguing season. Now, we were careful not to unleash any super-deadly spoilers upon you, but if you want to be completely surprised by the finale when it airs, then you may want to stop reading and avoid our delicious teasers. But, and we assure you, we left a lot out of our review on purpose. In other words, we want you to watch the show.

Travis (Michael Ealy) and Wes (Warren Kole) struggle to cope with the impending birthday of a mutual friend — who died on a job they helped him land. When Travis and Wes finally open up and bring their story to an impromptu therapy session with Dr. Ryan, their relationship — both as partners and as friends — takes and interesting turn. If that turn is for better or for worse, well, you’ll just have to tune in Friday night to see for yourself. But  we can tell you. . . as the crime fighting duo tells Dr. Ryan their story, their entire story, the heat is definitely turned up and Dr. Ryan decides if she’s a proud supporter of the struggling Wes-Travis bromance or a non-believer.

The season finale of Common Law brings everything we like to see in a finale: drama, tension, character conflict, some bullets (all right, lots of bullets), and even a little resolution. The evolution these two individuals have achieved over the season and the current state of their relationship (after the finale) will provide interesting fodder for future episodes and, ultimately, set the dynamic for an active season two — which we can’t wait for.

Be sure to check out the finale episode, which airs this Friday night at 10/9c on the USA network. Also, don’t forget to leave your thoughts, hopes, and dreams regarding the conclusion to this season in the comments section below. Please don’t cry too hard though. We know you might be sad that the show’s leaving for a while, but we can’t be having a whole bunch of tears staining our comment box.