Confirmed: Jersey Shore’s Snooki Is Having A Boy! (Photo) 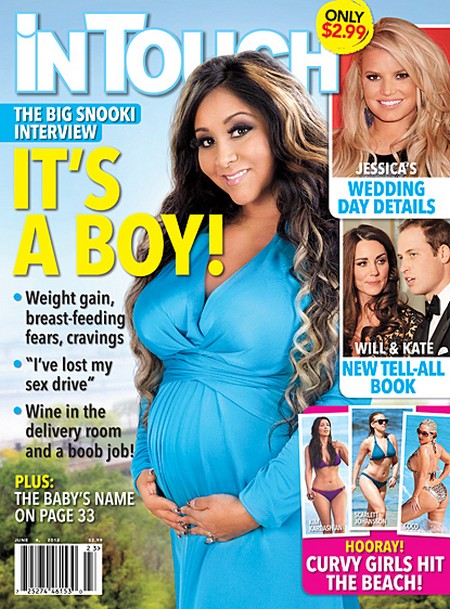 The current issue of InTouch features the cover story ‘Pregnant Snooki – It’s A Boy.’  The magazine has an big exclusive interview with Jersey Shore’s Nicole ‘Snooki’ Polizzi who is pregnant with her first child by her boyfriend Jionni LaValle.  During the interview Snooki dishes about her pregnancy details and more.

Snooki has revealed exclusively to the magazine that her new bundle of joy will be a baby boy.  Snooki has even filled them in on what she plans to call her new son.  They also have all the details on her weight-gain, breast-feeding fears and her cravings.

Snooki tells In Touch that she and Jionni are deciding between two names – Lorenzo or Jionni Jr. And while she’s thrilled to welcome a son, the 24-year-old admits she was hoping for a mini-me. “I thought it was going to be a girl. I was hoping it would be, because all girls want girls,” Snooki says, at first disappointed, but adding, “It’s still my baby, no matter what. I’m excited either way!”

Proudly showing off her baby bump at the exclusive photo shoot, the mom-to-be says she’s traded in her beloved pickles and now craves icy, cold treats. “I love anything cold and juicy, like Italian ices.” But even more surprising? While some women find their sex drive enhanced during pregnancy, you won’t find Snooki and Jionni anywhere near the smush room! “Our sex life is hardly there! I just feel too icky and gross,” Snooki confides. “I’m so not in the mood to do stuff.”

Snooki goes on to claim that we will not see her drunk and stumbling around anymore, her partying days are over.  Snooki says being a Mom has changed her.   Snooki is happy to put those wild partying days behind her.

Snooki is so serious about her decision rumors have surfaced that she is leaving the Jersey Shore house, not the series just the house, because she is convinced it’s not the best place to be while pregnant, but she’ll still be close by.

What do you think is Snooki reformed, or will the Snookster be back to her old tricks once the baby is born?  Hit the comments and let us know what you think.