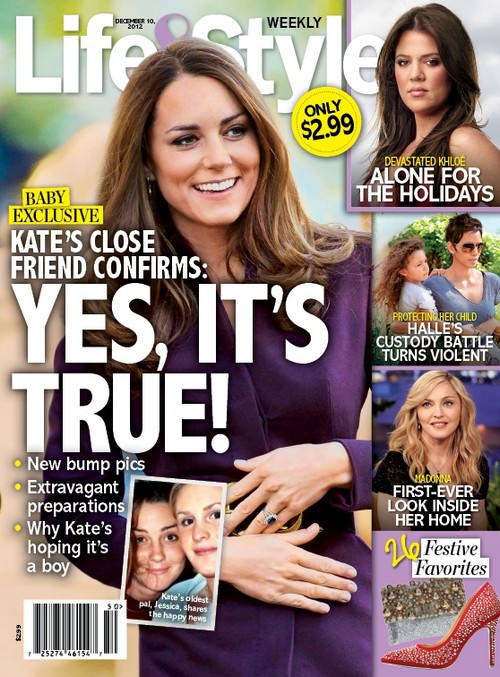 It looks like a big announcement is on its’ way and Royal Watcher’s are going to be absolutely thrilled. According to sources close to Kate Middleton, the duchess is in fact finally pregnant and she and Prince William are absolutely over the moon. The latest issue of Life & Style Magazine has all of the details coming straight from Jessica Hay, a close friend of Kate’s. Hay reveals,

“They’re planning to make an announcement in December. I have this on the highest authority, and it’s not to be taken lightly. It’s going to be wonderful, happy news when it’s announced.  William is much like Diana and will definitely be a hands-on dad and not rely heavily on nannies to raise his and Catherine’s children.  They both try to be as normal as possible in their private lives, and that of course is going to continue when they have children.”

The couple has to be extra happy at the timing of this pregnancy because it has been widely publicized that the Queen has vowed to make sure that William is crowned the next king if he and Kate have a child before her death.  It looks like two dreams will come true at once for the happy couple!

Also in the latest issue of Life & Style you can catch all of the juicy details on that violent fight that went down at Halle Berry’s home on Thanksgiving. Baby daddy, Gabriel Aubry and current fiance, Olivier Martinez beat the crap out of each other before the police arrived to break it up. An ugly custody battle for 4 year old Nahla is likely at the root of this fight.

Someone else having a miserable holiday was Khloe Kardashian, who was left alone to celebrate, in spite of having a huge family and supposedly supportive husband. Supposedly trouble has been brewing for awhile between Khloe and Lamar Odom. Pick up the latest issue to find out the latest on this, and many other stories.