Could Whitney Houston Have Been Saved? The Singer Reportedly Wanted To Go Back To Rehab Before Her Death (Photo) 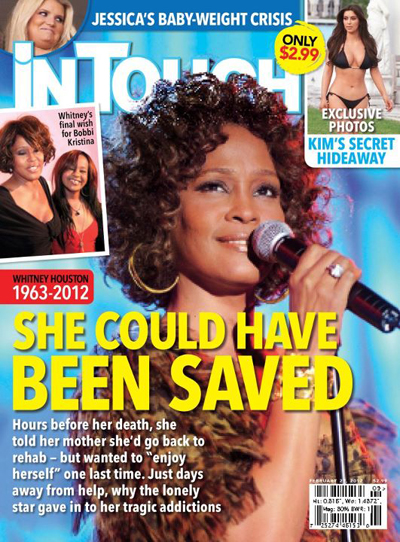 The current issue of InTouch Magazine features a cover story about Whitney Houston titled ‘She Could Have Been Saved.’

According to the magazine, Whitney had a phone conversation with her mother, Cissy Houston, in the days before she died and told her mom that she knew her life had been spiraling out of control and that she wanted to go back to rehab, right after Grammys’ weekend.

“She was telling her mom that as soon as the Grammys were over, she was going to go back into rehab,” a source told the magazine. “She said she just wanted to ‘enjoy herself’ a little bit first. But then she promised she would go.”

Photos of Whitney leaving a party, looking seemingly intoxicated, two days before she passed away at the Beverly Hilton Hotel seem to confirm that the “I Will Always Love You” songstress was living it up and having a good time prior to her death, and reports confirmed that the singer’s last meal had been heavy on champagne and beer, a big no-no for anyone trying to recover from alcohol and substance addiction.

“Deep down, she felt her career was a disaster,” added the source. “She felt it was too late to change. She had given up. It’s heartbreaking.”

It’s a shame that none of the reported 12 people in the Grammy-winner’s entourage that weekend could get through to her or make her get help immediately.

To find out more about Whitney Houston’s death– pick up the current issue of InTouch Magazine for all the details!