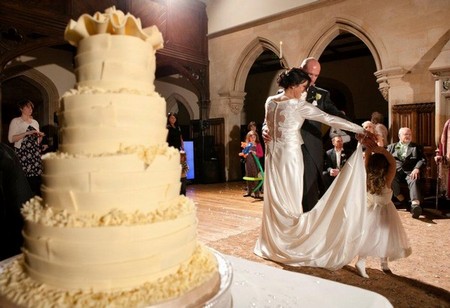 It’s no secret how obsessed I am with the Twilight franchise, but to throw yourself a Breaking Dawn themed wedding and changing your last name to Cullen seems a bit much – even for me.

Abigail and Andy “Cullen” from Bournemouth, United Kingdom tied the knot on February 5th and had their entire ceremony decorated to match that of Edward and Bella’s wedding in The Twilight Saga.

The couple said that what started off as a joke “kinda stuck”.  Stuck indeed – with a whole new name!  Abigail wore the exact replica gown that Bella wore in the film, while Andy donned a matching tuxedo similar to the one worn by Edward.  You can rightly assume that “Bella’s Lullaby” was played (that I don’t mind, it’s pretty amazing) as well as the entire Breaking Dawn soundtrack during the dinner.  Andy’s best man even toasted the couple saying, “Here’s to Bella and Edward”.

Ok, that is weird.  And I thought I was a crazed fan..  Lots of pics of the wedding HERE!