Courtney Stodden Gets Down And Dirty (Photo) 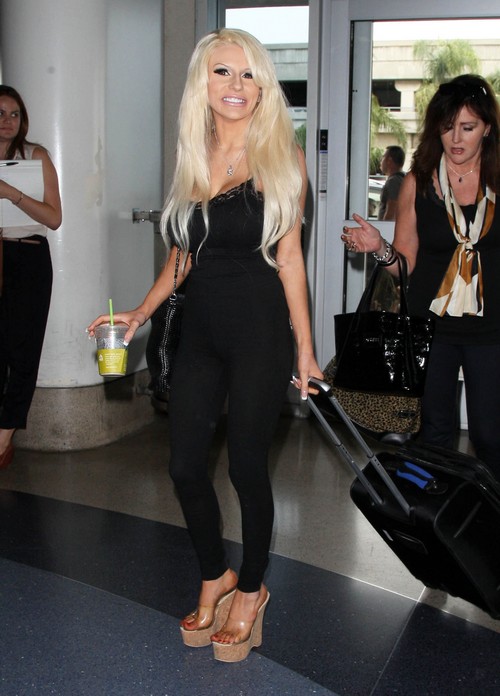 Courtney Stodden really makes people angry because of her blatant mercenary sexuality. But of course all that the 17-year-old is doing is responding to the zeitgeist – rather vigorously of course. We live in an age of blatant sexuality – an era in which celebs have no modesty or shame and the media serve as their pimp. Kim Kardashian, Demi Moore, Lindsay Lohan – these three celebs all get naked for the masses – whether in sex tapes, movies, or porno mags. If they can use their sexuality as currency then so can Courtney. More power to her! She is not one bit worse or sleazier than the three famewhores mentioned above. At lest she is honest about it.

Now that I’ve got that off my chest – let’s report that Courtney, who is married to 51-year-old actor Doug Hutchinson was up to her salacious best as she tweeted a super sexy photo of herself Monday.

Clad in a black bra and white short-shorts, Stodden invited her 82,000 followers to send in their racy images as well.

“Come get down and dirty with me while we floor flash together! I showed you mine… now show me yours. I’ll RT the hottest!” As US Weekly aptly notes, guess Courtney Stodden’s New Year’s resolution wasn’t to be more modest!

The 17-year-old actress/singer, married to 51-year-old actor Doug Hutchinson, rang in 2012 by posing for yet another suggestive photo and posted it to Twitter Monday.

Courtney confirmed in November that she’s never had plastic surgery – despite what appear to be her rather over-sized breasts.

“A knife has never touched this body,” the teen told Dr. Drew Pinsky on his Lifechangers talk show.

Husband Doug was quick to confirm Courtney’s claim of being all-natural, telling E! News “God was Courtney’s only plastic surgeon.” Sorry folks, I’m afraid God had nothing to do with it.