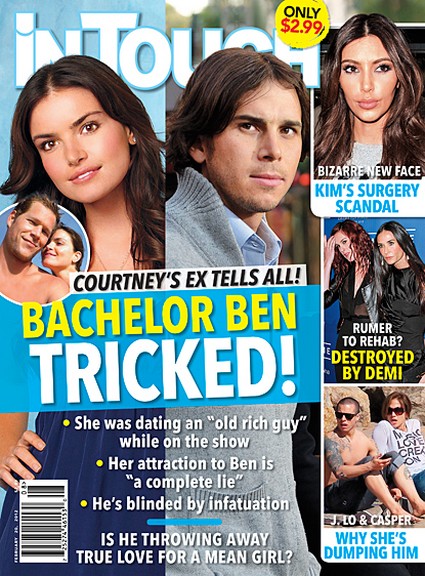 The current issue of In Touch Weekly features the cover story ‘Bachelor Ben Tricked.’  The magazine claims they have all the details from The Bachelor contestant Courtney Robertson‘s ex boyfriend about how she is tricking Ben Flajnik.     The boyfriend goes on to claim that maneater Courtney was dating an ‘old rich guy’ while on The Bachelor and that her attraction to Ben is a complete lie.  In Touch wants to know if Ben is blinded by infatuation and is he throwing away true love for mean girl Courtney?

Courtney has been making a lot of enemies on the Bachelor and has been removing her clothes to get Ben’s interest.  On this week’s Bachelor it seems like Ben will see the light and become  a little skeptical.  Ben’s new found feelings about Courtney are also tainted after two of the girls express their feelings about who and how Courtney really is.  Cannot wait for these details.   What do you think, do you despise Courtney as much as everyone else?   Are they just editing the show to make her look bad? Do you think she is playing Ben?

Also featured in this week’s issue the magazine has the scoop on Kim Kardashian’s new face.  They claim that Kimmie has  a bizarre new face and they have all the details on the plastic surgery scandal.   In Touch is also claiming that Rumer Willis is headed to rehab, not Demi Moore.  Apparently Demi’s troubles have pushed Rumer over the edge.

To find out all the information on the Bachelor and a lot more, pick up the current issue of In Touch!