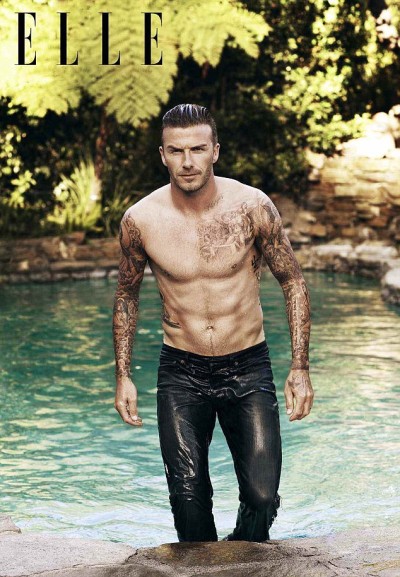 David Beckham is the first man to ever grace the cover of the UK’s Elle magazine and the soccer star hunk gives an adorable interview answering questions about his wife, Victoria Beckham, raising his daughter among all those boys, and all those questionable fashion disasters.

The man who singlehandedly made the term metro sexual described his signature style as “British gentleman” though he admits there were times in his public career where he wished he could have told his stylish wife no on the wardrobe decisions. Everyone remembers the matching black leather Versace outfit they wore right? It was only slightly better than Justin Timberlake and Britney Spears’ matching denim on denim ensemble. “They were Versace. But that’s one when I look back and am like, ‘What were we thinking?’ We laugh about that one. I remember that it’s really good until you do it as a couple. I look back on some stuff and think I can’t believe I actually wore that. I have no regrets, though – I knew at the time it was good.”

The New Zealand Herald revealed more from the interview:

Beckham tells the magazine that he is so smitten with his 10-month-old daughter, Harper, he likes to give her a nibble.

“I love to bite her legs, or shoulders. It’s how a baby should be. She’s so beautiful,” the soccer star told ELLE magazine in the UK.

“There’s no more love for a daughter than there is a son, but it’s just different,” he said. “When they [boys] are kids you can roll them around and they fall to the sides and they pick themselves up and they’re fine. Whereas Harper, now, she hits herself just slightly and she cries… I still think ‘Oh God, I can’t believe this, I’ve got a girl.’ And to see the boys with her it’s incredible. When they walk into the room, her little face lights up.”

The Beckhams said they’re hands-on parents, but like to have a date night once a week where they can just spend some time on their own.

“She [Victoria] comes home and shows me what she’s been doing all day and what exciting dresses and bags she’s got coming through. And then I say something boring like ‘I got kicked today.’ But we listen to each other. We try to go out at least once a week, just the two of us, a quiet dinner somewhere. It’s not about wearing a nice dress or a nice suit. It’s just going out and chatting and having some time together.”

How much do you want to rip his pants off? I know, me too! He’s beautiful, that’s a given, but his personality makes him so much hotter. He’s done enough in his life to be a total douche and I would give it to him – he’s earned it – but he refuses to be anything other than sweet and lovely. His parents did such an amazing job raising this man! But how much do you hate that Victoria has him? I know she rubs people the wrong way with her posing and refusal to eat solid foods but I actually like Victoria. I think she has a fun personality and you just never get to see it because she’s always trying to look so cold and in charge. And he LOVES her. It’s obvious. I can watch and re-watch the Kissing Cam video of the two of them at the Lakers game every day. It’s super cute.

Sigh. David also said in the interview his posing “naked days are over”. A good man knows when it’s over but I can’t help but think he’s got a few good years in him yet!