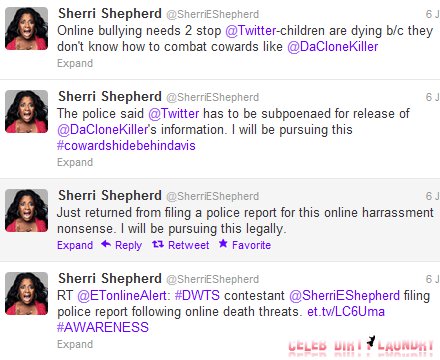 Sherri Shepherd has filed a rape report against a crazy Twitter bully who goes by the name of @DaCloneKiller; he offended her greatly, and now the claws are coming out. The View star has decided to stand up and take action against an insane fan who sent her a tweet, “Somebody should drag u in a back alley and rape you.”

Shepherd was seriously pissed off and tweeted back, “THIS IS A THREAT & I’M PISSED… You think I should be raped in a back alley? Let’s see if the police agree w you & I took a pic of your tweet. I am going 2 file a police report 4U threatening me… And so help me God, when I find out where U live, charges will follow.”

Shepherd posted again last on Twitter saying, “Just returned from filing a police report for this online harassment nonsense. I will be pursuing this legally… This type of bullying is one of the reasons children are killing themselves b/c there’s no consequences for the bully(s).”

CDL went to investigate and found some pretty disgusting tweets from @DaCloneKiller, with him rejoicing in the fact that he received his 15 seconds of fame. He tweeted 30 minutes before the time of writing this post, “Tell dat old bitch Barbara Walters I need a interview!” He also tweeted 3 minutes before the previous post, “I bet @SherriEShepherd can make a pepsi truck disappear in her mouth. OOWWW!!!”

DaCloneKiller needs a heavy time out at the mo’ and perhaps he shouldn’t be riding on his infamy? Be prepared for a bitch fight CDL’ers!