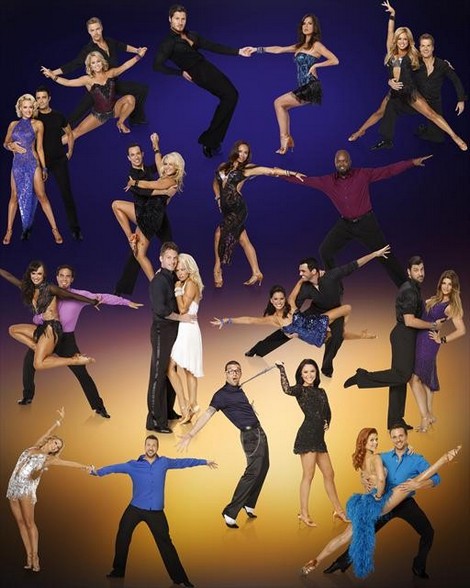 It’s back and with a twist tonight! Of course I’m talking about Dancing with the Stars All-Stars 2012 Season 15 which will feature 13 former contestants taking another shot as contenders for the mirror ball trophy.  On tonight’s premiere episode all 13 all-star couples will hit the stage performing either the Cha Cha or the Foxtrot to impress the judges and viewers at home, hoping they’re not the first couple sent home.

Let’s take a look at who will gracing the stage this time around!  Season 12’s first-runner up, Kirstie Alley seems absolutely over the moon to be returning. At age 61 she is the oldest competitor this season and she’s also going to be repaired with Maksim Chmerkovskiy. The duo shared a fiery partnership the first time around so I’m guessing there will be a lot of sparks (and fights) between them again!

I’ve never quite understood the appeal of Pam Anderson but I’ve come to accept that I must be in the minority. She’s back again and while her technique wasn’t fabulous last time around, her ability to become different characters within each dance was pretty impressive. She’ll be paired with Tristan McManus.

I loved Sabrina Bryan and couldn’t believe how quickly she was cut (like most everyone else I think). She was proof that you can’t assume others are voting because if you just assume your fav is a shoe-in, then they aren’t getting the votes to stick around. I can’t wait to see what a more grown up Sabrina will bring to the stage alongside Louis Van Amstel.

I’m surprised they’re allowing this but apparently former champions CAN come back and try to win it again. So that’s precisely what Helio Castroneves intends to do. He’s got Chelsie Hightower to help him so this should really be a couple to watch!

We all loved Joey Fatone in season four and he did great finishing as the runner up. He and his charm are back dancing with Kym Johnson again. She says this time she’ll really crack that whip, kind of implying she didn’t during the last go round!

Season 8 champion, Shawn Johnson is also looking for another win. She is lucky enough to be in the arms of Derek Hough so I’m guessing this is another great couple to watch almost immediately.

Joey Fatone isn’t the only former boy-bander looking for that mirror ball. Also back is Drew Lachey who won season two and looked pretty damn good while doing it. Anna Trebunskaya is his boss lady this season and she’s tough so I’m sure he’ll look even better now.

Gilles Marini was a season 8 runner up that single handedly made the ratings soar. He shook and shimmied and waltzed into many little old ladies hearts and so there will be a collective gasp when he takes the stage tonight. He’s paired with the fire cracker named Peta Murgatroyd, so look out!

Kelly Monaco won the first season and then lost when John O-Hurley demanded a recount and then dance off. She’s a pretty determined little spitfire and is paired with Val Chmerkovskiy, who isn’t as temperamental as his brother but sure has his skills.

Season 4 champ, Apolo Anton Ono is back and I couldn’t be happier. I LOVED him with Julianne Hough and I’m betting I will equally love him with Karina Smirnoff

I’m sure you’ve heard that since her reality show crashed and burned, Bristol Palin needs to continue her 15 minutes of fame and so she’s back again. Unfortunately Mark Ballas (who I happen to love) is stuck with her.

Melissa Rycroft is another one that found fame on reality television, but at least she’s adorable and very likable. She’ll be Cha Cha-ing with Tony Dovolani.

Season 3 champion, Emmitt Smith is considered a serious contender this season and he once again has Cheryl Burke to help him push the envelope. He’s packing that athlete focus and Cheryl has won on more than one occasion here proving that she can coach a novice to victory.

Tonight’s recap: The level of dancing this season is supposed to reach new heights this season.  Len says he expects fantastic performances this season.

Len:  “You are like a boomerang – I loved watching you dance, you are full of energy, high performance.  You posture was a bit dogy- but overal fantastic.”

Bruno: “You always bring it and live it large.  you did all this wonderful Michael Jackson moves.  Your posture has to change for the Cha Cha Cha”

Carrie Ann: “Joey you are one of my favorite showman.  That is the way to start off the all star season.”

Len:  “What you did you did well.  I know you are a fantastic dancer.  For me it did not feel like a foxtrot and it disappointed me.  Like I said in the beginning you are a good dancer.”

Bruno: “My darling the precious little princess is now a dancer.  You put a little sex appeal into it.  Stylistically it has to be a little more defined.”

Carrie-Ann: “That is what All-Star season is all about.  The posture, great footwork, I loved it.”

Len: “You were clean, [Crowd boos] I liked the dance give us a break.  But you go after it a little too much.  So far it was my favorite dance.”

Bruno: “You were an unleashed fury at the dance floor.  But you went for so much some time the dance could have been cleaner.”

Carrie Ann:  “My favorite firecracker is back.  You came back with a vengeance.  You have to be careful sometime you ove dance.”

Len: “You should be proud of that for me it was a joy to watch.  There was one or two incidents through the routine.  Helio you are a dancer”

Bruno: “You have such a great stage presence – you were off tonight.  But I think you did well.”

Carrie Ann: “Your charisma and charm are so great.  I would like to see more body work that will help with your lead in.”

Len: ‘It was a bit like a kid on a bike when you take the training wheels off you didn’t fall off and you made it through it.”

Bruno: “Pamela you look like a girl who can go all the way.  You are a good performer, you can perform and you can do it, but there was not enough work there.  You need to work harder.“

Carrie Ann: “You were definitely living the drama.  The body was not quite there, we want to see that booming body get there.”

Len: “The improvement was great, it was a little theatrical for me.  But great lines, I don’t understand why everyone pick on me.  I liked it”

Bruno: “Silky, smooth fluidity.  You got stronger and sexier.  You hold has to be stronger.  But overall excellent.”

Carrie Ann: “You can’t go wrong with a little sweet charity.  You have the most exquisite lines.  But, you have to have more body contact.”

Len: “It was not a gold medal performance, maybe a bronze medal.  It need a little more hip performance.  But you came out and sold it”

Bruno: “You completed the task.  The side extensions of your arms were absolutely exquisite.  That looked great!”

Carrie Ann: “Is it just me or did you just get 3000 times more sexy.  Your hip action threw me over the desk.  Great hip action, wow!”

Len: “I loved the mix of steps.  It had great balance to the routine.  You add sophistication to the routine, that you always want to see in the foxtrot.”

Bruno: “Panache and finesse, old time Hollywood gloss and glamor.  Technically so good, can I see it again?”

Carrie Ann:  “I missed you, that was gorgeous.  That was just ridiculous.”

Len: “Far more confident when you came out.  You have great legs, you arms have to be more fluid.  Overall a great improvement”

Bruno: “Is it really you, you were killing it.  You have to keep the focus.  You have all the elements, you need power and focus.”

Carrie Ann: “I am taken aback, I vote you the most improved.  Your legs were beautiful.  You have a lot more confidence.”

Len: “I like it but it was all a bit hard and hectic.  You are a nice dancer.  Just relax more and soften up the arms.”

Bruno: “Dynamic drew, it was wonderful.  It looks like you danced with Anna forever.  Yes, sometimes you stiffen up, but I loved it.”

Carrie Ann: “I was so worried the last time you had problems with your shoulders.  But it was fantastic.  But you were a bit rigid.  I want to see more relaxed”

Len:  “You were not this good season 1.  I don’t know what happened.  The choreography was terrific.  You just have to chill out.  I loved it, well done!”

Bruno: ” Bam, wham sexy ma’am, sexy and hotter than every.  You never did this dance before and you were a stunner!  Well done”

Carrie Ann: “Apolo is not the only one that got a whole lot sexier.  You to have so much chemistry. WOW!”

Len: ” I appreciated the fact that you did that.  You have to lift your rib cage and when you step back you have to feel the floor.  The quality of movement was not there!”

Bruno: “I loved the look and the drama.  I appreciated that but you have to get the technical part too.”

Carrie Ann: “You have the most beautiful, sensual quality when you dance.  Your body tells the story.  But, I felt you did not turn it all up tonight.”

Len: “You can teach technique, you can’t teach flair and you have it.  It was great.  The best for last!”

Bruno: “That was the essence of the Cha Cha Cha.  Fantastic!”

Carrie Ann: “Yabba Dabba Do! Emmit is back, you are born to dance.  Welcome back.  Here we go all Star Season.”