Dancing With The Stars All-Stars Week 2 – Who Do You Think Will Be Eliminated? (POLL & REVIEW) 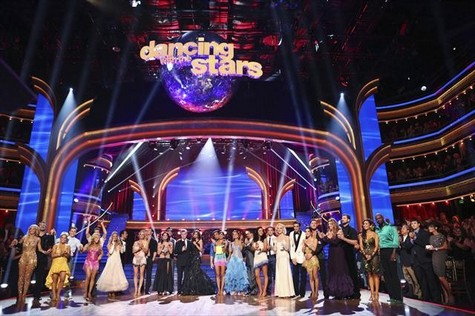 Last night was the second episode of the 15th season of Dancing With The Stars. We were treated to the Jive and Quickstep, but many of the celebrities suffered from poor footwork and bad technique. The highest scoring of the night was 26.0 and the lowest was 18.0. We’re not giving anything away, so read below for a full score review of last night’s performances. We’ve placed our bets. Have you placed yours?

Melissa Rycroft and Tony Dovolani were up first with the Jive. This was the first Jive by Melissa, as during her previous season’s Jive, she had to sit out due to an injury. Bruno applauded Melissa for her speed, but critiqued her on her “slipped” footwork.  Carrie Ann and Len gave Melissa and Tony a score of 8, while Bruno gave them an above average 7.5. Len loved the performance and we did too! Their total score of the night was 23.5, up by 2.5 points from last week, which gave them an average score of 22.3 and placed them squarely in the middle of the pack. Their previous season average was 26.9. Total score: 23.5

The controversial Bristol Palin and Mark Ballas danced the Quick Step. The first Quickstep during their season scored them 22. All three judges gave Bristol and Mark average critique last night and Bruno sarcastically quipped that it was like “the Quick Step in the Wild Wild West.” All three judges gave Bristol and Mark below average scores of 6, 6 and 6. The dancing couple dropped by 1.5 points, to a very low 18.0. The low scores pushed them down to the bottom of the pack with an 18.8 average. Their previous season average was 22.6. Whilst we’re expecting Bristol and Mark to hit the road, we doubt the rumoured voting blocs would let them go so easily. Total score: 18.0

Helio Castroneves and Chelsie Hightower did extremely well with their Jive. Carrie Ann referred to their underwhelming first week performance, but congratulated them on their spot-on delivery of the second week. Helio’s fifth season Jive scored him 24 points. This season, he was once again extremely close to that high amount with 23 points. Carrie Ann gave the highest score of 8, while Len and Bruno both gave Helio and Chelsie 7.5. The latest scores placed Helio and Chelsie in the middle of the pack with a 22.3 average. Helio and Julianne Hough’s previous season average was 27.1. Total score: 23.0

Apolo Anton Ohno and Karina Smirnoff were lauded for their Quick Step. Carrie Ann gave creepy critique with, “Someone put on his competition pants on tonight, you were truly driving the dance.” Apolo and Karina’s score increased by 2.5 points. Apolo scored 26 points for the Quickstep during his fourth season stint on DWTS alongside Julianne Hough. Carrie Ann gave an extremely high score of 8.5, while Len and Bruno followed closely behind with 8 and 8. Their total score was 24.5 and this nudged their average up to 23.3. Apolo’s previous season average was 27.5. Total score: 24.5

The highest score of the night went to Sabrina Ryan and Louis van Amstel with their Quick Step. Carrie Ann said they had “grace and drama” and gave them her highest score of the night, 9.0. Len and Bruno also gave their highest scores of the night with 8.5 and 8.5. Sabrina scored 26 points during her season with Mark Ballas on the Quick Step, but this season there was no increase in points. Sabrina and Louis are currently sitting tightly at second place with 24.3 average points, but they’re first in the overall points of the night. Sabrina’s previous season average was 27.0. Total score: 26.0

Kirstie Alley and Maksim Chmerkovskiy danced the Jive and scored some pretty awesome critique from the judges, with Bruno’s campy and creepy “the girl works hard for her money.” All three judges gave Kirstie and Maksim a score of 7, for a total score of 21.0. Kirstie’s 12th season stint with Maks scored them 20.0 points during the second week of competition. They did the Quickstep during their season, instead of the Jive. Kirstie and Maks increased their score by 2 points this week and settled into second last place with an average score of 20.0. Their previous season average was 24.7. Total score: 21.0

Emmitt Smith and Cheryl Burke, the best dancers of last week, scored a very low 22.5 with their Quick Step of last night. They were critiqued for their poor frame and lack of technique. All three judges gave Emmitt and Cheryl a score of 7.5. The Quickstep during their season scored them 24 points. Emmit and Cheryl settled into the top part of the pack with an average score of 23.5. Their previous season average was a very high 26.8. Total score: 22.5

Drew Lachey and Anna Trebunskaya danced the Jive and received terrible critique on the footwork technique of the dance. They scored 7.5 from all three judges. The Jive during Drew’s previous season stint with Cheryl Burke scored him 27 points. Drew and Anna moved into 8th place with an average score of 22.0 points. Drew’s previous season average was a score of 27.7, the second highest of the current All-Stars contestants. Total score: 22.5

Joey Fatone and Kym Johnson’s lackluster Quick Step was critiqued for lack of technique, poor posture and bad footwork, but all of the judges still gave the dancing couple 7.5 points. Joey and Kim scored 24 points during their 4th season on the show. Joey and Kym fell to the bottom of the average score pack with a lackluster 21.5. Their previous season average was 27.5. Total score: 22.5

Shawn Jonson and Derek Hough scored extremely high points with their Jive. Bruno eloquently stated, “It was exhilarating and eye popping, I don’t think you can give more.” Carrie Ann and Bruno scored them 8.5, while Len scored them a very high 8.0. Shawn and Mark Ballas scored 26 points for the Jive during the 8th season of the show. A high score of 25 shot Shawn and Derek into a third place average with a score of 23.5. Shawn’s previous season average was 26.9. Total score: 25.0

Kelly Monaco and Val Chmerkovskiy was the penultimate couple of the night with the Quick Step. Bruno critiqued Kelly for her frame and Carrie Ann critiqued her for small lines. Carrie Ann and Bruno gave a score of 7.5, while Len gave a score of 7. Kelly and Alec Mazo scored 24 points during the first season of DWTS for the Quick Step. Kelly and Val lulled around in 9th place on the average score chart with 21.8 points. Their previous season average was 23.0. Total score: 22.0

Giles Marini and Petra Murgatroyd danced the Jive and received some of the highest scores of the night. Carrie Ann said that she saw a “little John Travolta happening.” All three judges gave Giles and Petra a score of 8.5. Giles’ previous Jive scored 26. The excellent points pushed Giles and Petra into the highest average score of all of the contestants, with an outstanding 24.8 average. Giles’ previous season average was the highest of all of the contestants – 28.1. Total score: 25.5

We’re predicting Kirstie Alley and Maksim will leave the competition tomorrow night. What are your thoughts? Let us know in the comments below which couple you’re voting and rooting for!