Dancing With The Stars Worst Performances Ever (POLL & Video) 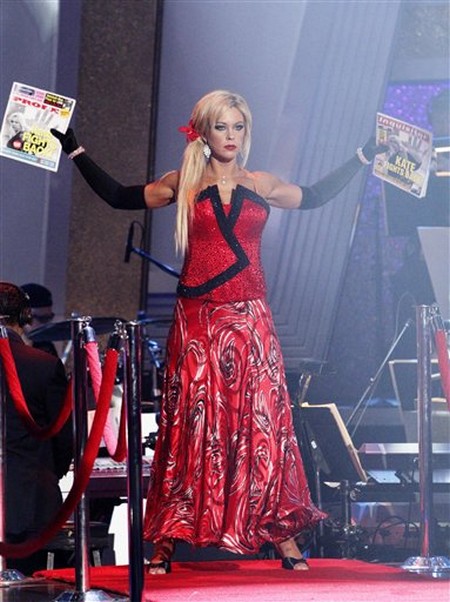 Dancing with the Stars Season 15 is just around the corner and what better way to get ourselves geared up for the new season than to reminisce about some of the most outrageous and worst performances ever during the past 14 season. In honor of the very “worst” performance of all time, here are the top eight. But believe me, there are more.

This season on DWTS it will be an all-star season.  Who do you want to see back in the ballroom? Which athletes, movie or television stars, singers or other celebrities would you pick?  In our list below we show you who should not come back, but I am sure one or two of them will pop up during this season’s DWTS all-stars!

The first very “worst” celebrity performance that comes to mind is none-other than Mrs. “Kate Plus 8” herself, Kate Gosselin. Her ratings grabbing personality caused her husband Jon to walk out on her and her DWTS partner Tony Devolini wanted to quit after the second episode. Kate was dismal and boring, the judges actually slammed her for “going through the motions like a Stepford wife”. Her worst performance was the Paso Doble to Lady Gaga’s “Paparazzi” in week three, check out the video below, if you dare!

Second place is Master P who made it unbelievably to the four episode with his lack of musicality and walking instead of dancing on the stage. The hip-hop star stomped around on stage with his huge two left feet, but in his defense, he did fill in for his son Lil’ Romeo at the last minute and partnered up with Ashly delGroso. His worse performance had to be when they danced the cha cha cha.

Third place is also the most humiliating performance of DWTS ever! Singer Michael Bolton, in his second week performed a jive dance to “Hound Dog” that was so horrible that one judge said it was the worst jive in the show’s 11 seasons. Bolton was furious and demanded an apology. Personally, I thought professional dancer, Chelsie Hightower should have been fired for having him perform such a humiliating routine. Check it out and see what you think.

Fourth place is Mike “The Situation” Sorrentino, who may own Jersey Shore, but he certainly could not own DWTS. Mike had next to no moves, not even any pumping action on the dance floor. His dancing partner, Karina Smirnoff choose a fox-trot to the Black Eyed Peas “Boom Boom Pow”, that was the beginning of one of the worst performances on DWTS. No amount of flexing his pecks could save the Jersey boy this time, his overuse of energy in trying to look cool, burned him out with his dance moves.

Fifth place is UFC light-heavyweight champion Chuck Liddell. I don’t know if it was the mohawk, the tattoos or the fact that he can beat another man to a pulp with his bare hands, but he just always looked angry on the dance floor with partner Anna Trebunskaya. His poor footwork and timing in the samba, did it for me, the man can fight, but he can’t dance.

Sixth place goes to one half of magicians Penn &Teller, Penn Jillette. His partner Kym Johnson just couldn’t train his gigantic feet that were clearly not made for the dance floor. When the couple danced the cha cha cha, even judge Bruno Tonioli compared the routine to a trailer for the movie, “Shrek Goes cha-cha-cha”.

Seventh place goes a “Palin”, namely Bristol Palin. It’s not like the Palins weren’t getting enough attention already, but did we really need to see a hometown visit to Alaska during the competition? The worst was how the producers saved Birstol Palin’s performances with Mark Ballas for last, like it was the best thing we were going see during the whole episode. Bristol’s dancing sucked and her song choices were embarrassing, the worst was “Mama Said, You Can’t Hurry Love?”, give me a break!

Eighth place goes to The Bachelor’s Jake Pavelka, everyone women’s worst nightmare. Jake stumbled during his salsa with partner Chelsie Hightower and it was played over and over again in slow motion, although that’s not what distracted the judges, it was the button-free shirt that was too cheesy for even DWTS.

In fourteen seasons of Dancing with the Stars who do you think had the worst performance? Take our poll and sound off your comments below.

Are you looking forward to season 15?