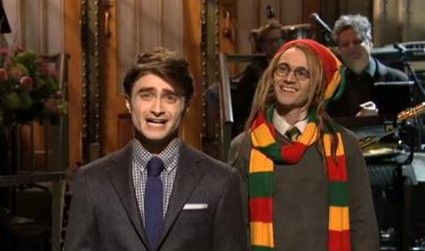 My friends keep telling me that I’m crazy to have not gotten into the Harry Potter franchise.  I will one of these days – when I have the time to read and watch all 20 of them (give or take).  So although I’m not a fan of the film, and not very knowledgeable about Daniel Radcliffe’s acting chops, I was still curious to see his skills while hosting last night’s Saturday Night Live.

I thought that young Daniel did pretty well, and was thoroughly surprised at his comedic timing and his ability to hold his own against the SNL comedy vets.

It was Daniel’s first time as host, and you can be sure there were many hilarious Harry Potter scenes, as well as skits mocking Casey Anthony, Ricky Gervais and Jersey Shore.  Daniel wasn’t shy either, even partaking in several man-on-man kisses with homeless spin-the-bottle participants.  One of my favorite skits was Daniel playing Harry himself at Hogwarts School in 2020, unable to let go of his ‘glory days’ and welcoming new students.

So all in all, Danny-boy did a good job.  I’m a new fan and perhaps a pinch closer to committing to HP.  Just a pinch.