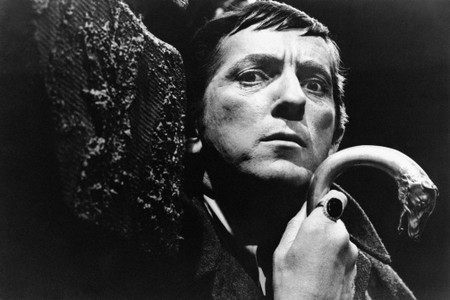 Jonathan Frid, who played a vampire named Barnabas Collins on the old cult classic show, Dark Shadows , has died at the age of 87.  Long before Twilight made vampires popular there was the powerhouse classic television show called Dark Shadows.

“I think the most poignant moment was standing with Jonathan when we met Johnny Depp and Tim Burton,” she said. “He gazed at Johnny Depp’s makeup and said, ‘I see you’ve given the hair a few more spikes.’ And Johnny said, ‘Yes, we’re going at a few things differently.”

“Both Johnny Depp and Tim Burton looked at Jonathan and said, ‘We wouldn’t be here without you,” she recalled.

Dark Shadows originally ran as a daytime serial on ABC from 1966-71.  It was known for its campy scenes and less than fabulous production values.  Frid’s character, a 200 year old vampire grieving the loss of his love was eventually turned into a deep antihero that was both likable and relatable  (Sounds like another famous vampire, doesn’t it?).

Though best known for Dark Shadows, Frid did a lot of television and theater work, but never forgot the role that made him famous as he enjoyed performing Dark Shadows readings at conventions, in his final years Frid was residing in his native Canada, still acting in plays and updating his website for his multitude of fans.

We loved Jonathan Frid and we hope that he has a great afterlife, if there is one.