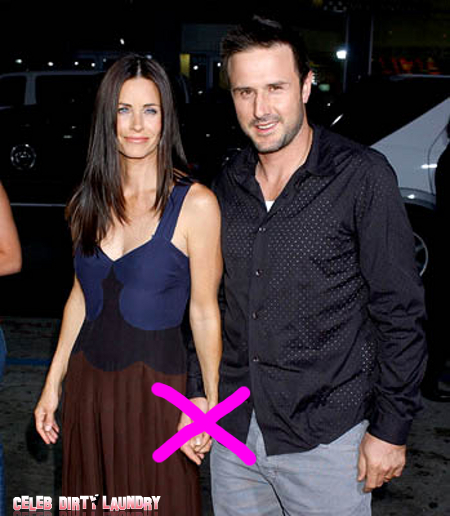 David Arquette recently filed official papers to divorce his wife Courteney Cox once and for all. The exact reason behind the divorce has been cited as being a result of “irreconcilable differences” and now the two are headed into what will, probably, be a long-winded court battle, as David is seeking joint custody of their daughter, Coco.

According to TMZ, David hasn’t asked for any spousal or child support, so this might be a somewhat amicable final split for the couple . . . but whenever the court is involved things are sure to get heated.

David currently has no lawyer by his side so he is representing himself in court, which, in my opinion, never seems like the brightest idea — as I’m pretty sure David never went to law school. I think he just went to Celebrity School.

The couple married a really long time ago, nearly thirteen years ago, after meeting on the scary movie Scream set in 1999. Let’s hope this little court tuffle doesn’t make us all scream, because we don’t need to stress out over another celebrity divorce. Why can’t you two just kiss and make up  . . . and be FRIENDS?

It’s been about two years since the couple announced their separation, upon which they said “we will remain best friends,” ones committed to raising their daughter. “The reason for this separation is to better understand ourselves and the qualities we need in a partner and for our marriage,” they said when they decided to make their first trip to Splitsville.

What do you all think about David’s decision? According to TMZ, the papers were signed and dated on March 23rd, so he waited  few months before actually submitting them . . . do you think he was trying to decide if this was the right thing to do? Let us know in the comments section below!