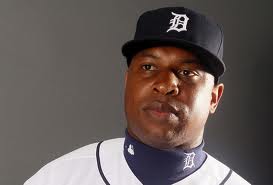 Delmon Young showed that he is racist pig this morning when he flew into an anti-Semitic rant that led the Major League Baseball bum attacking and injuring a man.  Delmon was in NYC when a panhandler wearing a yarmulke dared to approach the Detroit Tiger player.

Delmon made it clear that he hates Jews as he immediately began screaming ‘Fu*king Jews! Fu*king Jews!’ at the beggar.  Apparently Delmon thought that it is was okay to begin ranting racist remarks on the street – but he was wrong.

A brave gentleman confronted the racist apparently not pleased by what he heard –  prompting Delmon to allegedly assault the hero.  Delmon allegedly scratched the man like a bitch and pushed the fellow to the ground.

The victim called 911 and police arrested Delmon for aggravated harassment.  Investigators are deciding whether to charge Delmon with a hate crime.  If what Delmon did is not a hate crime then what is?

Detroit Tigers star Delmon Young was arrested in NYC this morning after allegedly screaming a bunch of anti-Semitic slurs at a man in a yarmulke … and then fighting another dude.

According to the NY Post, 26-year-old Young was approached by a panhandler who appeared Jewish … when the MLB star exploded in anger … screaming, “F*cking Jews! F*cking Jews!”

Another man confronted Young … and things reportedly got physical … with Young allegedly scratching the guy and pushing him to the ground in the lobby of the Roosevelt Hotel.

According to the report, the victim called 911. Cops quickly responded to the scene and arrested Young for aggravated harassment. Investigators are considering charging the athlete with a hate crime.

Delmon – we won’t be cheering for you – hopefully you won’t play baseball again… unless it is in prison.