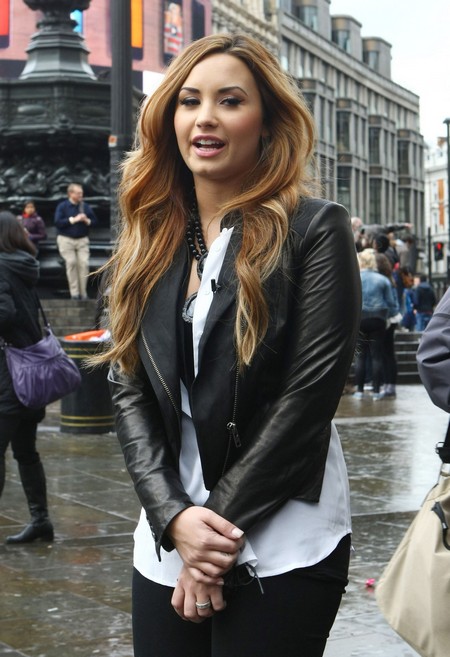 Demi Lovato believes that her troubles began at age twelve when bullies tormented her.  Demi was brutally traumatized by mean kids calling her a fat whore and she has never recovered.  The former Disney star recently spoke with Fabulous magazine and explained how she suffered at the hands of other kids:

“They called me a whore and told me I was fat and ugly. I shouldn’t have listened, but I took it to heart and it hurt. I thought maybe I didn’t have friends because I was too fat.”

Lovato then decided to take action and make herself lose weight.  In six months she lost 28 pounds and was tipping the scales at a mere 88 pounds.

She said: “I’d make myself sick up to six times a day. My mum was worried, but because I was going through puberty I was having growth spurts so she assumed that was why I was thinner.”

When losing weight didn’t help her to feel better, Lovato then turned to self-harming – a growing plague amongst today’s troubled youth.  Demi revealed:

“It started with my wrists. People saw that, so I cut in places they couldn’t see. You do it because you feel so bad inside. You don’t know how to take it out other than on yourself.”

Lovato was reportedly out of control and ended up punching a backup dancer while on the Jonas Brothers tour.  That violent incident ended with Lovato heading off to rehab:

“It wasn’t my idea, but I didn’t fight it. It was really, really hard and scary. I was homesick and lonely and several times I thought f**k it, I’m leaving. But my mum told me I would regret it. This was my only chance.

I had 14 hours of therapy a day. I listened to music and learned to knit. When I finally left, it was like being let out of prison.”

Since leaving rehab Lovato seems to be holding herself together pretty well.  She has also decided to speak out about eating disorders and self injury, with the hopes that she can help others struggling with these addictive behaviors.

Do you believe Lovato is now on the right path?  Would you view her as a role model for young girls?  Tell us in the comments.