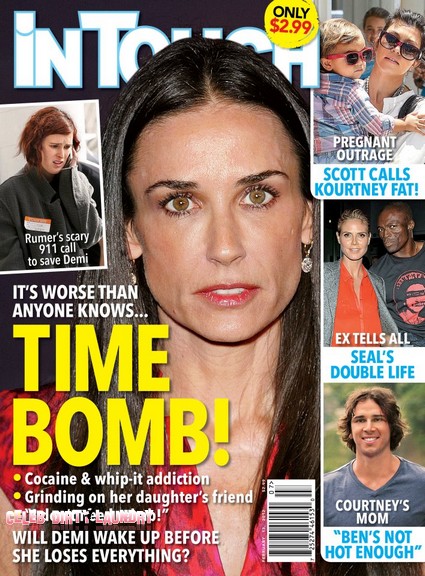 The current issue of In Touch Weekly features the cover story ‘It’s worse than anyone Knows – Time Bomb!’  The magazine is claiming that Demi Moore is worse off than anyone is aware of.  The have all the details on Rumer’s scary 911 call to save her Mom Demi.   At the party where she overdosed she was grinding on her daughter’s friend and told people she did not need rehab.

With a cocaine and whip-it addiction the magazine is wondering whether Demi will wake up before she loses everything.   According to this week’s issue of People magazine Demi is seeking treatment for her problems.  They claim the problems all stem from her sense of insecurity as she approaches 50 years old.  Some people have speculated that Demi’s substance abuse issues may have also contributed to her breakup with Ashton Kutcher, and they point to her shrinking body frame as proof.  What do you think, is Demi out of control?

Also included in this week’s issue Scott Disick called his pregnant wife Kourney Kardashian who is pregnant fat.  Kourtney is outraged!  This week’s issue has all the details on Seal’s double wife.  In surprise new last week Seal and Heidi Klum announced they were splitting and now Seal’s ex is spilling all to the magazine.

To find out all this and more, pick up the current issue of In Touch Weekly!