Demi Moore’s Biggest Fear: ‘Not Worthy Of Being Loved’ (Photo) 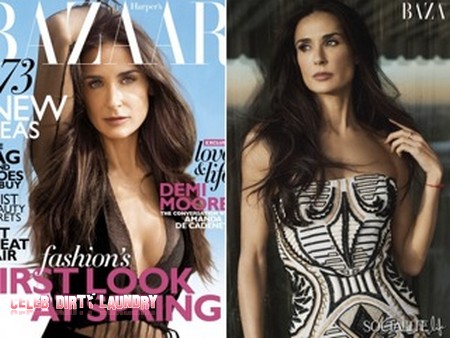 An interview in next month’s Haper’s Bazaar is providing a brief glimpse into Demi Moore’s emotional state just one week after she ended her six year marriage with “Two and a Half Men” star Ashton Kutcher last November.  The interview, a Q&A with celebrity photography Amanda De Cadenet, spans a range of topics and exposes Moore’s personal insecurities, from her weight and body image struggles to how she lives in fear that she is “not worthy of being loved”.

Though she did not blatantly discuss the split with Kutcher, Moore comments that while the idea of being abandoned used to scare her, she is now most afraid of not finding true love: “what scares me is that I’m going to ultimately find out at the end of my life that I’m really not loveable, that I’m not worthy of being loved. That there’s something fundamentally wrong with me.”

Always petite, 49-year-old Moore appeared to be wasting away during the past few months. Many have blamed the stress of her break up with Kutcher for her shockingly frail appearance, while others have speculated that Moore was battling an eating disorder. During the Harper’s interview, Moore finally addresses her body image struggles, telling De Cadenet, “I think I sit today in a place of greater acceptance of my body, and that includes not just my weight but all of the things that come with your changing body as you age, to now experiencing my body as extremely thin. Thin in a way that I never imagined somebody would be saying to me, ‘You’re too thin, you don’t look good.’” Moore then goes on to discuss her continued struggle with a love-hate view of her body and how having her three children has helped her work through some of those feelings.

Moore and De Cadenet are collaborating as executive producers on an interview show for Lifetime called “The Conversation”. It will debut on the network in 2012.

The February Issue of Harper’s Bazaar—with Demi Moore on the cover—hits newsstands on January 17th.