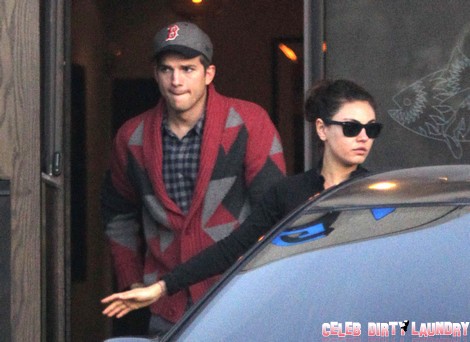 The distressed she-bitch, Demi Moore, is the Boney M of celebrities – she flares up like Herpes once a year and guilt trips you into buying her sad story of scorned love. According to latest reports, Moore is stalling the divorce proceedings in order to spite her ex, Ashton Kutcher. According to a source, “Demi sees things differently and she cannot forgive Ashton for moving on so quickly to Mila [Kunis] and flaunting their relationship publicly. It’s a classic case of a woman scorned.” Allegedly, the unhinged Moore is deliberately delaying the divorce through incessant “objections and demands”.

If you’ve been living under a rock for the past year, and/or you are the doppelganger of Bruce Jenner, Moore and Kutcher split after he cheated on her with several women. Moore lost her mind soon thereafter and held a non-stop pity party for one. Kutcher moved on from the split and shacked up with former That 70’s Show co-star Mila Kunis, while Moore, on the other hand, relished the role of scorned ex-wife who hates her former boy toy. Kutcher and Moore were like dolphins in the deep blue sea during their marriage, and constantly updated their Twitter accounts with images of everlasting love, but unfortunately, love in Hollywood lasts as long as a season of America’s Next Top Model.

There were also rumours of reconciliation and Kaballah-based sexual retreats shortly after the split, but not even Kabbalah could save this doomed ex-couple. Kutcher is currently traversing the streets of L.A. with Kunis, while Moore watches from the sidelines and drinks copious amounts of cheap Vodka and Diet Red Bull. It’s a Shakespearean tragedy-turned-comedy. No wonder Moore is hell bent on being called Karma.

If all else fails and Moore does indeed lose her mind, at least she’ll have Boney M’s seminally pointless Rasputin to keep her warm during those lonely nights.

The Haunted Couple – Has Demi hired a hitman?