Dexter Reconciliation As Michael C. Hall And Jennifer Carpenter Back Together 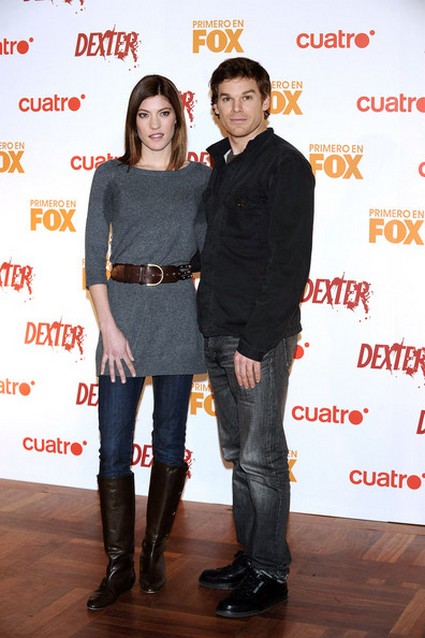 Some good news for a change as Dexter stars Michael C. Hall and Jennifer Carpenter appear getting back together after their sad divorce – which was finalized a little over a year ago. Hall was reported to be still in love with Jennifer when they split up. Hall was sick with Hodgkin’s lymphoma at the time of the split but is said to have recovered from the disease.

Hall and Carpenter play brother and sister – Dexter and Debra (they are really 1/2 siblings – they share a father only) on the smash hit TV show. They eloped on New Year’s Eve in 2008, but divorced two years later amid rumors that Michael cheated with Julia Stiles who played Lumen Pierce. Funny how Lumen was eliminated after only one season on ‘Dexter’ although she was nominated for an Emmy and a Golden Globe for her role.

Radar reports that Hall and Carpenter had a canoodling session at the Beverly Hill’s Peninsula Hotel Tuesday night:

“Michael and Jennifer were seated at a dimly lit corner table, sipping wine. It was a very romantic setting and definitely looked like a date,” an eyewitness tells RadarOnline.com.

“When Jennifer got up to use the ladies, Michael squeezed her hand, looked up at her and she smiled. And when she got back, they held hands on the table for a bit,” the eyewitness says. “At one point, Michael leaned across the table and he and Jennifer kissed — a make-out kind of kiss, not a friendly one. They both looked really happy.”

We hope they make up and get back together – they are both amazing on Dexter and appear very likable.