Dexter Season 7 Episode 11 “Do You See What I See?” Sneak Peek Video & Spoilers 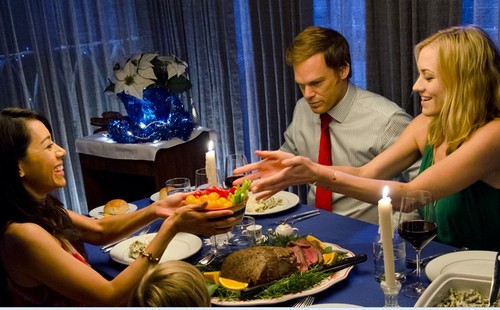 On next Sunday’s DEXTER, La Guerta’s Bay Harbor Butcher investigation zones in on Dexter. Tom Matthews comes to see our fave serial killer to tell him that La Guerta thinks BHB is still alive and that it’s him.

Dex has no one to blame but himself. I understand that seeing your sister while you’re sinking a knife into someone is a bit disconcerting, but that’s no reason to leave your blood slide behind. It seems like all of Dexter’s problems this season are caused by him breaking Harry’s rules.

He’s allowed love in his life in the form of Hannah which is causing him Deb problems. He killed Viktor without a proper plan – more to avenge a fallen colleague than to dispense his own brand of justice and that caused him Isaak Sirko problems. And then last night, he broke his rules again to take out Hannah’s dad Clint. I’m not saying Clint wasn’t a cruel dirt bag, but he wasn’t a killer. So I wonder whether this has opened a door for Dexter to expand his killing field to those who are bad, but not killers…

Spoiler alert: If you’re one of those people who doesn’t like spoilers, stop reading now! We have some juicy spoilers for you about the season 7 episode 11 of Showtime’s “Dexter”

After Matthews comes to talk to Dex about the BHB case – he tells Dexter the trauma he and Brian suffered led to Brian being a killer (Ice Truck Killer) that chopped up his victims. Matthews says it’s interesting that the BHB chops up his victims also. He also tells Dexter that it’s interesting that Doakes was killed in the cabin rented by the guy who killed his mom. He asks Dex “what are the odds?”

Dex goes to see Deb to tell her he’s got to end the BHB speculation once and for all. She doesn’t think it’s possible to divert La Guerta and Matthew’s investigation.

Hannah and Deb will have a face off about who loves Dexter more. Deb says she’ll do anything to protect her brother from Hannah. Does that include sending her to prison? Deb knows about the witness Arlene who could put Hannah away for good and she told Dexter she wasn’t going to listen to him anymore, so he may not be able to get her to back down…

Meanwhile, the urge to kill surfaces again. Looks like Hector Estrada is up for parole. He’s the guy who orchestrated the brutal murder of Dexter’s mom – you could actually say he’s the one who gave birth to Dexter by having his mom slaughtered in front of him. Anything that happens to that guy is karma, but can Dexter afford to keep killing with the BHB spotlight on him? Can he stop?

Hannah seems to be endorsing him taking out Estrada when she tells him it’s the universe giving him a Christmas present. He’s got Estrada on the table and tells him who he is and that he’s going to kill him, but will he? That last guy on the table was the phantom arsonist and he let him go. Hannah’s dad he did on the Slice of Life – is Dex off of table killings or was it just a respite?

Also, did anyone happen to notice if Dex took a blood slide from Hannah’s dad? I didn’t see it, but then again, I watch and write simultaneously. Let me know if you saw it. If he didn’t, is he not taking trophies from his non-standard kills? I’m always looking for Easter Eggs in this show about the rules…

Deb will have a serious car accident and Dex finds a suspicious water bottle on the scene. Did Hannah try to take his sister out? He comes to chat with Hannah about it and she doesn’t seem pleased to be accused! Wonder if she did it? Even if it was a warning, that is not the way to stay on her boyfriend’s good side – that’s the way to end up back on his table Hannah!

With just two episodes left in the season, it’s getting to a boiling point. Hannah vs Deb – La Guerta & Matthews vs Dexter – Quinn vs Kashkas. I’m on the edge of my seat and can’t wait to see what happens this Sunday.

Tune in to Showtime at 9 pm to watch Episode 11 of Season 8 “Do You See What I See?” and also check in here at Celeb Dirty Laundry for live recapping and commentary! See you then!