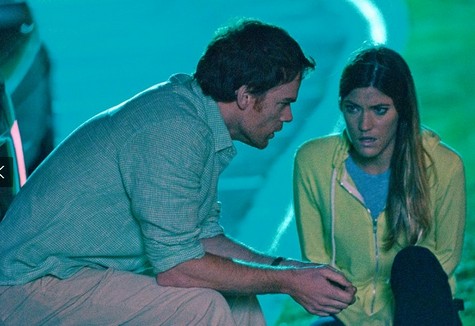 Tonight is an all new episode of Showtime’s hit show Dexter called “Sunshine and Frosty Swirl.” The Season 6 cliffhanger on the serial killing show saw Deb, struggling with romantic (ick) feelings for the man she knows as her brother. She was coming to find Dexter to (maybe) tell him “I love you – no, really – like I really love you, love you.” Instead, what she sees is dear Dex shoving a knife into the Doomsday killer. She gasps, he turns and sees his beloved sister seeing him for the monster he really is. “Oh God,” he mutters. He was in church, after all…

Season 7  began last week with Dex in a frantic race to somewhere… He speeds toward the airport, changing lanes, looking behind him frantically. Who’s he on the run from? His car’s out of gas, his credit cards (5 of them!) are declined at the pump, so has to dig cash out of what is obviously his “go bag” stuffed with fake passport, cash and a change of clothes.

Is Dex skipping town? Is he on the run from Deb and the Miami cops? His inner monologue plays while he purchases a ticket to Budapest, musing that when your whole life is a secret and you’ve been exposed, what do you do? “Do you run?” he asks himself.

But then wait – suddenly we’re back at the murder scene picking up where season 6 left off. Succinctly Deb asks, “Dexter, what the f*ck?” He fakes anxiety and remorse and hustles to explain how he happened to have plastic wrap and blood splatter protective garb on him when Travis attacked him. Would Deb believe the gruesome scene she walked in on was actually self-defense as Dex explains?

In tonight’s episode, we’ll see Deb trying to be a good sister to perhaps the worst of brothers. She wants to cure Dexter of his little serial killing problem. Is there rehab for that? Deb wants him to move in with her so she can stop his killing spree. Will Dex be able to control Deb while she tries to control his homicidal impulses?

Dex will try to explain to Deb why he has to kill and that it was their dear old Dad that taught him the serial killer trade. He’ll also reveal Harry’s code. How will Deb react to losing faith in her beloved brother (and erstwhile crush) and seeing her Dad’s memory tarnished by Dex’s assertions?

LaGuerta will be digging into the Bay Harbor Butcher case again – she never liked Doakes as the killer. The Russian mob angle promises more tasty villains for Dex to deal with and as always, more blood and dead bodies!

Tune in here at 9 p.m. Eastern for a live recap of events as they unfold and a post-mortem on what it all means and what’s to come in Season 7!

Episode 2 opens with Deb leaving Dex’s apartment – running from him in terror! She vomits and spurns his touch. She’s very clearly not okay with his revelation. Then Dex tells her their dear Dad taught him how to kill and gave him a code to follow.

Dexter opens his bloody kimono and tells her how Harry found him in a pool of his mother’s blood and how he’s been broken ever since. He even reveals his Dark Passenger and how their Dad taught him to control the beast.

“I am the worst fucking detective in the world,” Deb says. It’s early in the season, but this may be the best line of the season. After she delivers the line, she delivers a hard right to Dex’s face and storms out. Harry appears to reiterate that Dex blew it… Thanks for the info Dad!

Dexter wonders who sent him the Ice Truck Killer hand and wonders who’s on to him. Vince reveals that Louis was “helping” find the hand that had been stolen from evidence and eBay’d. Hmm…

At the cop meeting, Deb wants to know why Mike’s killer is still walking the street. Only Dex knows he’s fish food. She also introduces a serial killer follow-up case but insists on assigning Vince to the case.

Deb wants to set up serial killer rehab at her place and have Dex move in so she can cure him. He agrees to try it. Deb tells him she loves him “more than he will ever fucking know.” The only thing sicker than a serial killer is the chick that wants to bang him – even worse when it’s your sister.

LaGuerta confirms the blood on the slide was Marshall’s so she knows something’s hinky with the Bay Harbor Butcher case. She phones the FBI – we’re left hanging for the moment.

The cops shut down the strip club and rattle George’s cage. Quinn pours a drink down a stripper and she reveals Kaja was dating one of the managers who hasn’t been seen since.

Night one of serial killer rehab begins at Deb’s. She says they’re going to do it all together – Dex cracks “Hope you have a big shower.” At this point, I’m thinking that this is Deb’s way of getting an instant cohabitating relationship with the brother she’s obviously still crushing on.

Deb wants to know how it feels to want to kill. Dex shares and she tells him he’s a sick fuck. She insists he call her if he starts to get the urge to kill. “There have to be families out there more fucked up than us. But I sure as hell wouldn’t want to meet them.” This is the best dialogue Deb has ever had!

Deb calls lights out on night one at Dexter Rehab and he’s left frustrated because he needs to get to Louis ASAP!

Quinn’s got Kaja’s boyfriend Tony in interrogation, but security tapes alibi him out. Angel and Quinn apply more heat and Tony points the finger at Victor (the Russian who’s busy finding Nemo.)

Dex wants to work the body search and Vince wants out. Deb wants to drive him, but the break on Kaja/Mike’s killer takes precedence, so she reluctantly lets Dex go alone.

Dex chats with killer Wayne Randall at the scene but then bails to break into Louis’ pad over lunch break. He finds the list of credit card numbers beside the laptop but doesn’t know why he’s messing with him, so he browses video files. He sees a vlog Louis made saying he wants to see Dex lying in his own piss and references Bob Henley.

George finds a mystery guest in his office – Victor’s mobbed up dad – the senior Baskov. He wants to know if the other Russian mobsters bumped his missing kid and George insists no. Quinn gets a call from a stripper asking for a lift home so we know there’s info to be revealed.

LaGuerta gets the evidence box on the Bay Harbor case and checks out the slide box.

Dex and Deb come home to his apartment and guess who’s there? Louis! He ruffles Harrison’s hair and says he’ll see Dex at work – a violation of the ultimatum on all counts. What to do, what to do?

Deb fries up a steak for Dex and when her back is turned, he dopes her meat. A good night sleep for Deb looks like a bad evening all around for Louis…

Dex knocks out Louis and stashes him in his car but doesn’t kill him. Deb wakes from her drug-induced snooze to a call from dear brother. He tells her he snuck out to do bad, but that he couldn’t do it. He fought the red haze. He admits “I am a monster” and says she should arrest him.

This heartfelt exchange takes place as Louis remains unconscious in the trunk. He dumps him still sleeping in a park. Dex’s inner dialogue promises that he’ll get Louis out of his life without taking his.

Isaac Baskov and his muscle come to see Tony at home for an “exit interview” about why he quit the club. Baskov wants to know if it was over Kaja’s death. No matter. He gets a screwdriver in the head and they’re gone.

While Deb’s gone to get Frosty Swirls for them, Dex and Wayne Randall chat a little more about life. Randall tells him how much he misses his best girl Hannah. He faces the sun and sighs then leaps in front of an oncoming truck. Finally –some death and blood splatter. I thought it was going to be the first Dex episode with none of the sticky red stuff.

Upcoming for next week – and be here for another AMAZING live recap!!

Kaja was wearing a bracelet when she died and it may have had GPS in it. It could lead the Russian mobsters to dear Dex.

LaGuerta presses on with trying to clear Doakes’ name.

Looks like Dex may crack under the stress of Deb-induced rehab.

The bodies Randall was supposed to be pointing the cops to never turned up before he took an asphalt cruise. Deb wants Dex to find Hannah. Looks like he’ll get to dip his DNA-seeking wick into the always hot Yvonne Strahovski as she begins her guest turn next week on Season 7, Episode 3 “Easy As Pie.”