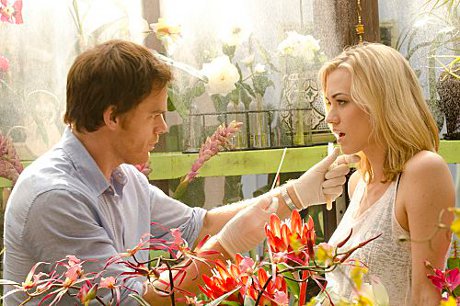 Dexter is well on its way for a fantastic seventh season, and what better way to prepare for the next episode than by checking out a few teasers, spoilers, and previews? If you find yourself a bit irked by the spoilers, then please divert your attention now, as we waste no time getting down to business. Continue reading for Dexter Season 7 Episode 3, “Buck the System,” spoilers.

Dexter wants Deb off his ass and tells her something bad will happen if she continues to ride him. Deb walks in on Dexter choking someone  in the interrogation room and has to pull him off. Meanwhile, Louis struts into the station and gives Dex a knowing look. I wonder . . . does the gamer geek have any idea who he’s messing with?

Deb will send Dex out to collect DNA from Wayne Randall’s slinky sidekick — played by the very luscious Yvonne Strahovski (most recently of Chuck) beginning her guest arc on the show. When she opens her mouth for his probe, Dex looks much more interested in giving her some of his DNA than swabbing for hers.

The stripper Quinn’s hanging with points the cops to a bracelet Kaja was wearing the night she was killed — remember back in episode 1 Viktor took it from her corpse before he stole Sgt Mike’s car and left the crime scene? That bracelet should be deep in the Atlantic by now . . . but looks like it was a GPS tracker Viktor’s mobbed-up dad used to keep an eye on his naughty son. The GPS footprint leads the mobsters right to Dexter’s boat. Dex is pretty good one-on-one, but against the Russian mafia?

So many things are closing in on Dex right now: Deb’s rehab efforts are cramping his style, LaGuerta’s reviving the Bay Harbor Butcher investigation, and Louis is out to get Dex and now so is the mob! I’m totally on the edge of my seat and can’t wait for next Sunday’s Dexter Season 7  Episode 3 “Buck the System.” Tune in here for live recap of the show!