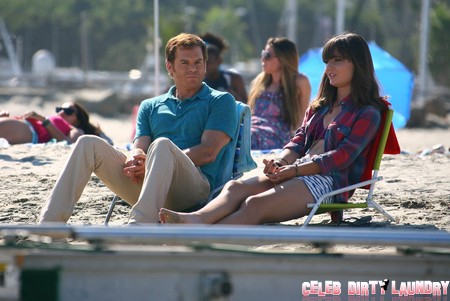 Dexter day Sunday is almost upon us kids. I’m so excited to see my favorite serial killer again. So some spoilers ahead if you haven’t watched last season. If you watch the show regularly then you know what happened with the cliff hanger from last season, Lt. Debra Morgan, Dexter’s sister on the show, walks in as Dexter is shown killing off Travis Marshall (played by Colin Hanks).

That’s a big load to drop on your sister and in the exclusive behind the scenes video you see the brother-sister duo relationship definitely changed from past seasons now that the cat is out of the bag so to speak. “I’m still your brother. Nothing’s changed,” Dexter tells Debra, but she replies, “Everything’s changed.” Little does Debra know the extent of her brother’s wicked ways.

This would be a hard pill to swallow for any sibling, but it was revealed last season that not only does Debra have feelings for Dexter (he is adopted, but they could of done without that plotline) but she was promoted to Lieutenant so now she is Dexter’s boss since he works for Miami Metro Police too. What’s Debra going to do? Awkward tension but according to James Remar, the two characters are “gonna try to make things work.” However, what Debra saw can’t be unseen so there will be unavoidable tension between the two and to make matters worse, Dexter acts out and starts attacking a suspect which Debra sees.

Where the season decides to take the characters is anybody’s guess since Debra has the power to turn Dexter in, but honestly I can’t see that happening, but I have been wrong before. Special guest stars this season include Yvonne Strahovski, Calista Flockhart, Katia Winter, Jason Gedrick, Ray Stevenson and Santiago Cabrera. With a guest list this long, the new season of Dexter should go off with a bang (or a slice)!

Are you excited for the new Dexter? Starts September 30th on Showtime at 10 p.m Eastern and of course Celeb Dirty Laundry will be bringing you an awesome live recap each week!

Actor Michael C. Hall filming a scene for his hit TV show ‘Dexter’ on the beach in Long Beach, California on August 20, 2012.