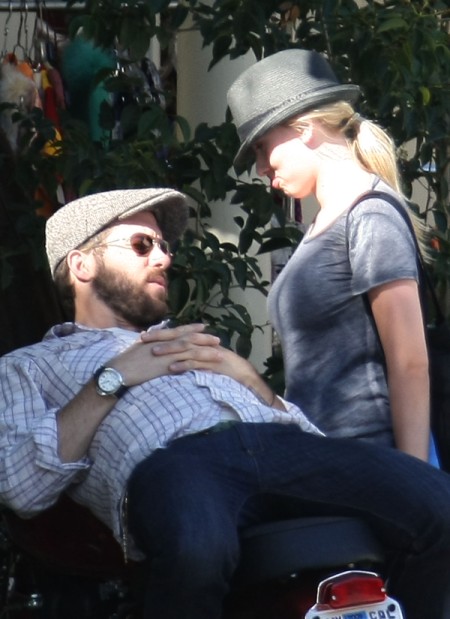 Ryan Reynolds and Blake Lively pulled a fast one on the world and got married this weekend in South Carolina but could Ryan have spilled the beans to his ex-wife despite Blake’s insistence that all the details stay hush hush?

We can’t know for certain now but it could possibly explain Scarlett Johansson’s behavior with Jared Leto at the Democratic National Convention last Thursday. Scarlett took to the microphone at the convention to encourage the youth vote. She’s into politics so it made sense. What didn’t make sense was that she spent the rest of the night feeling up ex-boyfriend Jared Leto. The couple dated in 2004 and apparently he’s been holding out for her. I could care less about Jared Leto’s motivations. Jordan Catalano doesn’t do it for me like he used to that’s for damn sure. However, the timing of the cuddling and pawing could make sense now in the context of Ryan’s wedding to Blake.

Could Scarlett have just been feeling a little blue? Could she have needed some attention? I didn’t hear anything about her boy toy so I don’t think he was there. Sometimes when you hear sh-t news like your ex-husband is getting remarried after only being with a girl for a year, you just want to feel desired and Jared was there to get the job done. I’m sure that was all it was for her and Scarlett’s rep concurred. The rep told E! News: “Scarlett is still dating Nate [Naylor]. This is very innocent. Scarlett and Jared have remained friends, nothing more, nothing less. Let’s concentrate on the DNC and her speech, which is exponentially more important.”

Maybe Scarlett didn’t  know about the wedding and the convention just turned her on. That happens too! But I just can’t be sure. Blake Lively’s ex, Penn Badgley, came out today saying he had no idea the wedding was going down. And he and Blake dated for three or four years so if she didn’t tell him (and they still work together), Ryan probably didn’t tell Scarlett. But are there different rules for ex-wives/husbands? Is it polite to let it slip that a wedding is taking place especially since Ryan knew the media would be all over it? I want to say it would be the nice thing to do.

But I also don’t want to pull a pity party for Scarlett. She orchestrated the divorce from Ryan, and from all intents and purposes, appears to have moved on. But still… there’s that cringe… that slight uneasy feeling when you know your ex-significant other is REALLY moving on, right? Perhaps she just wanted Jared to help take her mind off things?