Did Snooki Get Engaged on Valentine’s Day??? 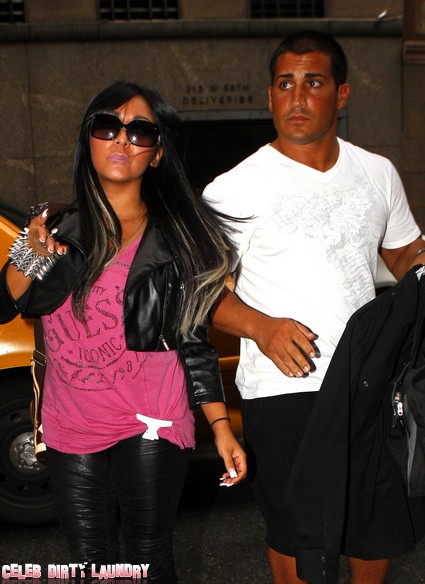 On the first season of MTV’s The Jersey Shore, pint sized Guidette Nicole “Snooki” Polizzi was looking for some Guido love in Seaside Heights. She eventually found it, and lost it, and found it again. Now, several reports are circulating saying that the 24-year-old reality star and her boyfriend, Jionni LaValle, are engaged.

Rumours of the engagement started when Star Magazine reported that they had received an email blast from PR Firm The Hip Event stating, “Tonight we are the first to inform you that it is official. Snooki and Jionni are indeed engaged. The text message came through to The Hip Event at approximately 11:30pm from a very close source of the future groom inviting us to an exclusive close friends gathering tomorrow for the celebration.” Along with the release, the firm has been tweeting countless media outlets about the engagement all day. Giselle Yankovich of the PR Firm said they have no idea who the source is, but that the engagement took place on Valentine’s Day in NYC or Hoboken, NJ.

However, Snooki’s rep denied the engagement rumors tonight on Examiner.com. “It’s a no, but I can’t wait to see what they say next week. No clue who those people are or why they are tweeting about my client.” The rep told Examiner.com

So far, both Snooki and Lavalle have failed to comment on the engagement news. Snooki spent the night tweeting pictures of her and her cat and Jionni fielded comments about Snooki’s supposed infidelity with The Situation. Bleh…

News of this supposed engagement come as Snooki and Jersey Shore co-star Jenni “Jwoww” Farley make plans to shoot their MTV spin off. First the pregnancy and anorexia rumors and now this? Maybe MTV producers are trying to see what the plot of the show should be based on Google searches.