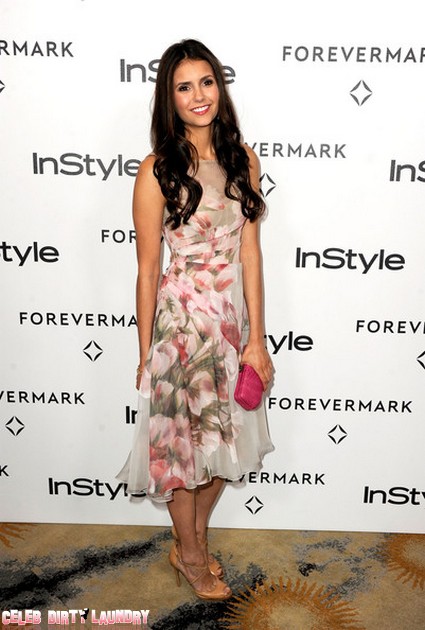 It will be interesting to see how The Vampire Diaries stars Nina Dobrev and Ian Somerhalder act on the red carpet of tonight’s 2012 People’s Choice Awards. Rumor has it that Dobrev turned down a passionate marriage proposal from Somerhalder over the Holiday season and things have since gone sour between the couple.

A source close to the Canadian-Bulgarian actress told In Touch magazine, “[Dobrev] is freaking out, saying, ‘I don’t want to marry him!'” She thinks she’s too young, and with all the offers she’s getting, she’s poised to be a big star.”

Dobrev, who just turned 23 on January 8th, is quite a bit younger than 33-year-old Somerhalder, a valid reason for the actress to be unsure about a walk down the aisle. However, things certainly didn’t seem tense on Twitter this week as Dobrev thanked Somerhalder for his birthday wishes: “Thx mr smoulderholder, when I am 35 I will look great ;) “@iansomerhalder: #HappyBirthdayNina is trending right now!35,wow you look great!”

The couple originally tried to keep their relationship a secret but eventually went public when it became painfully obvious that they were smooching off set. Somerhalder gushed to US Weekly in September about his co-star and girlfriend, saying there are a million things he loves about her: “She truly enjoys life. Her desire to experience and appreciate everything around her, and chuckle, and enjoy it, it’s great.”

Of Somerhalder, Dobrev said, “He always has a positive outlook and positive energy, and he’s always happy. He is a glass-half-full kind of guy, not half-empty.”

Sounds kind of like someone could be headed for the ‘glass-half-full’ friend zone!

Both Somerhalder and Dobrev are up for Favorite Actor and Actress at tonight’s People’s Choice Awards. Their hit CW show The Vampire Diaries is also nominated for Favorite Sci-fi/Fantasy Show.