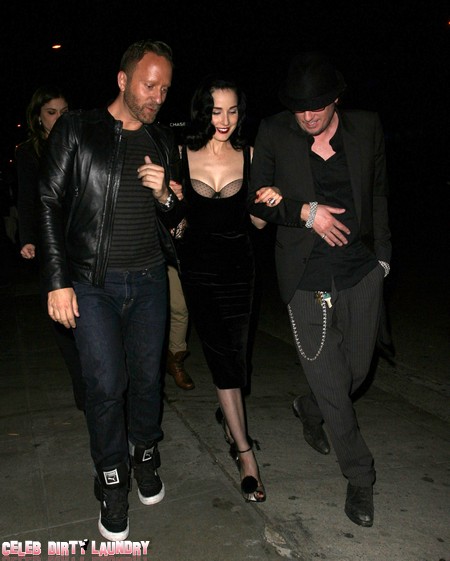 Dita Von Teese is no stranger to undressing provocatively in her professional capacity.  But the stripper burlesque artist can’t help but strut her stuff even on her time off from work.  Dita and her bust was busting out all over West Hollywood on Friday night.  As Dita left Bar Marmont the paparazzi were up close and personal with Dita and her ample assets.

Dita always wanted to be a stripper and her parents hoped she was only going through “a phase” when she told them she wanted to be a burlesque dancer.  The 39-year-old star embarked on her controversial career when she was only 18, and while she wasn’t worried about telling her mother and father, she knew it wouldn’t be their ideal choice for her.  Now if her mom had been Kris Jenner there would have been no problem as long as she got her cut.

Hollywood Hiccups reports:  Burlesque dancer and my girl crush Dita Von Teese is escorted out of Bar Marmont by two gentlemen on April, 6, 2012 in West Hollywood.  Dita caused a frenzy with the photographers as she exited their prurient interests.

The 39-year-old showed off her curves with her lacy black underwear on show, while her hips were accentuated with the skin skimming cut.    Dita had been at the Chateau Marmont with a group of friends for an evening out when she wore her usual sexy attire.

MORE: Dita Von Teese Wanted To Be A Stripper

Dita seems to have completely artificially sculpted breasts in the pics.  Do you see that?  Let us know in the comments below.