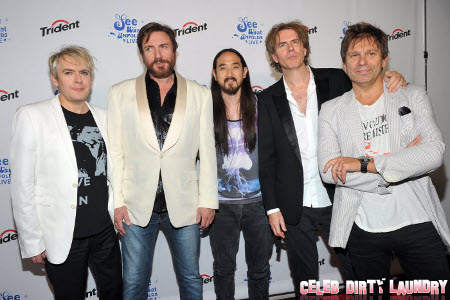 Trident Gum‘s See What Unfolds campaign took a turn for the awesome last month when it unveiled its first “See What Happens LIVE” event, which treated thousands of fans to a spectacular night of prizes and music, all of which was hosted by DJ Steve Aoki.

DJ Aoki wasn’t the only musical guest there. Legendary Duran Duran showed up for a super special surprise performance and the house was brought all the way down when Aoki unleashed a never-before-heard remixed performance of the band’s classic hit “Hungry Like The Wolf.” Sounds like a stellar performance and, if we weren’t so busy monitoring the crazy life of Tom Cruise and his Scientological happenings, we would have definitely stopped by. The new track was aptly named “Hungry Like The Wolf: Steve Aoki vs. Duran Duran – The New York Werewolf Mix.”

The excitement didn’t end there! Later, Trident announced an amazeballs video competition through Genero.TV , an online community that is well known for connecting artists to fans. The site enlisted the help of its fancy users to create videos for the new track. The jury winner of the competition will win a whopping $10,000, two runners up will each receive $2,500, and the viewer generated choice — chosen by people like you — will receive a generous prize of $5,000. Not too shabby, right?

We want you all to jump in the fun and vote, vote, vote for these awesome videos! The voting period starts today, July 24th, and will continue through July 26th. You have time, but act fast! Make sure your voice gets heard and you help lead the worthy people to victory . . . . CLICK HERE to learn more about the competition, check out the entrants, and vote for your fave! We have a favorite on there, but *shhhhh* we’re not telling yet.