BY Annemarie LeBlanc on April 16, 2012 | Comments: one comment
Related : Dancing With the stars, Dancing With The Stars Season 14, Donald Driver, Reality TV 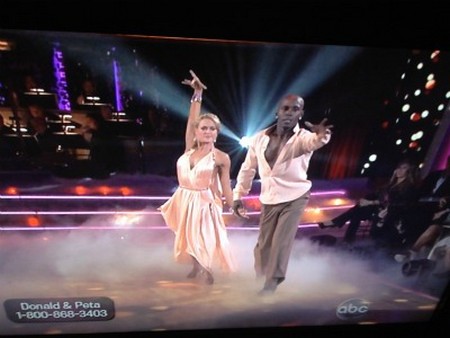 Donald Driver danced the Salsa tonight as Dancing With The Stars continued with its fifth episode. The theme for this week’s episode is “Latin Week’ and this is always one of my favorite episodes. Latin Week returns as Carlos Santana takes over the ballroom with performances of some of his classic hits throughout the evening. We recapped the tonight’s show for you and if you want to see how all the couples did go HERE! Did you see Donald’s performance last week if you missed it you can see it here!

Judges Comments:  Carrie Ann: That was divine. You are so smooth, there was so much technique needed in the lifting and you mastered it all. You are  so in control with. You were just in control all over the place. Len: I almost agree with Carrie Ann –  I thought the lifts were spectacular. The rest of it nearly but not quite. I do apologize. Bruno: Naturally I have to say the buildup was amazing. You built up so much and I was expecting you to carry it on like that. But you interrupted the flow. But overall I liked it good job!