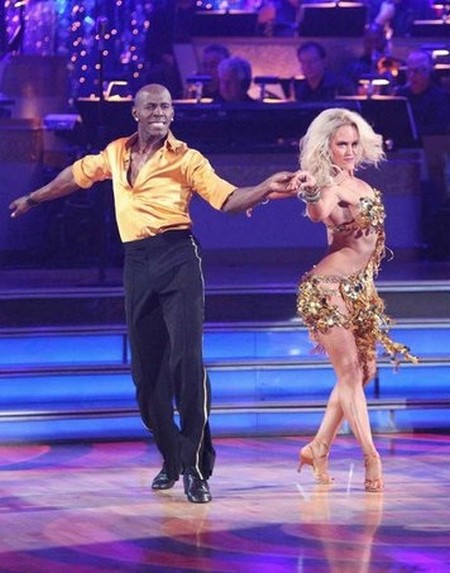 Donald Driver danced the Foxtrot tonight as Dancing With The Stars continued with its sixth episode. The theme for this week’s episode is ‘Motown Week.‘  It will honor Motown’s greatest music – Motown Legends Smokey Robinson, The Temptations and Martha Reeve.  We recapped the tonight’s show for you and if you want to see how all the couples did go HERE! Did you see Donalds performance last week if you missed it you can see it here!

Donald Driver and professional dancer Peta Murgatroyd,, dancing the Foxtrot – Peta and Donald had this to say about their Foxtrot: “I’m gonna do a lot of work on this Motown piece. We’ve got Foxtrot. It’s pretty hard to put Motown stuff into Foxtrot. It’s going to be a bit difficult, but I’m going to have to do some research.”  Is there a secret Motown weapon in Donald’s soul? “I don’t know.  We will find out,” said Donald.

Judges Comments: Len: I know you were disappointed with me last week so I thought you were going to come out and show me some fireworks and you didn’t – you came out and exploded, I loved it. This man can give more, Peta work on him and get me what I want because this guy could be a great dancer. Bruno: You are a show man, confidence and power. You put so much into it, your performances are getting better and better. Carrie Ann: I love how you went from Motown into professional hold, it was great.

Don’t forget to finish the show DWTS will feature a special Motown Dance Marathon, where the couples will be showing off their classic dance moves from the Motown era.  We will be posting the video of it later tonight so don’t forget to come back and check it out!