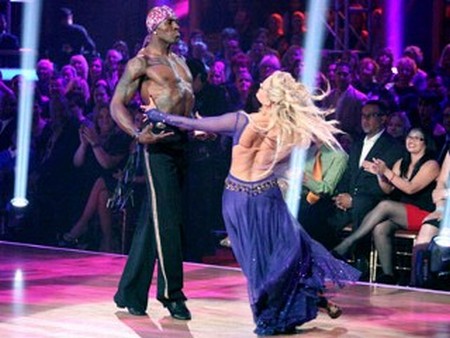 Donald Driver danced the Waltz tonight for her first dance as Dancing With The Stars continued with its ninth episode.  The competition is really heating up as the contestants dance for their last chance to get into the finals.  The remaining four couples hit the ballroom tonight with two rounds of competitive dance performances, a Ballroom dance and a Latin dance.  We recapped the tonight’s show for you and if you want to see how all the couples did go HERE!  Did you see Donald’s performance last week if you missed it you can see it here!

Donald Driver and professional dancer Peta Murgatroyd, dancing the Viennese Waltz.  Peta had this to say about their semi-final performances this week. “We have the Waltz and the Samba.  I like those two dances for the Semifinals. They’re perfect for the Semifinals — one romantic and soft one and then we’re going to blast them with the Samba.”

Judges Comments:  Carrie Ann: It was so dreamy. It’s so nice to see you, last week I wanted  the emotion on the dance floor and this week you brought it. Unfortunately there were a few times when your feet missed it.  It was beautiful and I loved it and it was still a mesmerizing dance.  Len:  When I was watching your dance it brought me back to a different era, an era of grace and elegance. It was beautiful. I would’ve liked to see your head a little more lifted it up.  Bruno:  Donald it is much harder to impress with the waltz that it is with the tango or a quickstep but you did just that. You have a gentle soft quality to it. You are extremely light on your feet and you extended your lines better tonight. I thought you did a fantastic job tonight. I am very impressed.