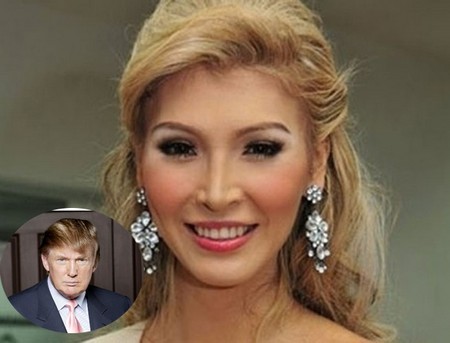 Donald Trump is legal action by the transgender beauty queen, Jenna Talackova, for disqualifying her from the Miss Universe pageant on the grounds of her birth sex – which was male.  According to super-tough attorney Gloria Allred, Donald, had no right to insist that all contestants be ‘naturally-born’ females.

Jenna’s passport says female which she feels should satisfy The Donald.  Donald has backtracked on his position and says that he will allow Jenna to compete.  Jenna said that she never asked to see Donald’s private parts and she should not be judged by hers.

TMZ breaks it open:  The transgender beauty queen who was DQ’d from the Miss Universe pageant due to her birth gender says she never ONCE asked to see Donald Trump‘s penis — so his obsession with her genitals isn’t fair.  23-year-old Jenna Talackova just held a news conference — and her attorney Gloria Allred insisted … Donald Trump unjustly disqualified her from the competition last week by limiting participants to “naturally-born” females.

Gloria said, Jenna “didn’t ask Mr. Trump to prove he’s a naturally born man, or see photos of his birth, or to view his anatomy … It made no difference to her. Why should it have made a difference to him?”  For the record — all of Jenna’s official documents, including her driver’s license and birth certificate, say she’s female. Jenna even proved it by whipping out her passport.

Looks like Donald dropped the ball on this one.  What do you think?  Let us know in the comments below.