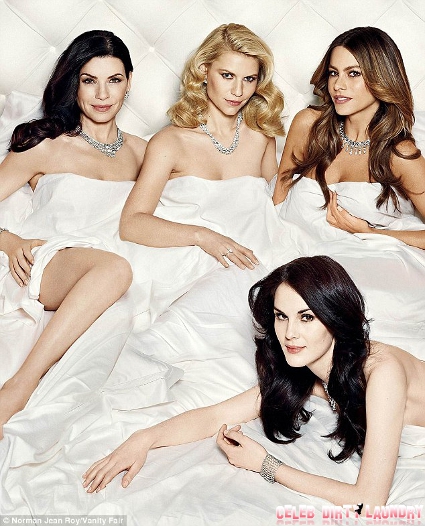 Downton Abbey star Michelle Dockery sheds her early-1900s garb and bares all on the cover of Vanity Fair’s May issue. The 30-year-old actress, free of her dreadful corset and wrapped in nothing but a bed sheet, shares the cover with three other actresses.

The composition of the photo is somewhat . . . odd. Poor Michelle is sprawled out at the end of the bed, while the other three sit high, mighty, and comfy in the uppermost portion of the frame. However, despite the awkward position of Dockery, it definitely makes her the focal point of the piece. And with such a successful show as Downton Abbey, I think she deserves the attention, don’t you?

Downton Abbey has definitely hurled Michelle into the realms of super stardom, gaining her recent appearances on The View and even David Letterman’s show. Where will this young star go next? Who knows, but we think it’s probably somewhere great and wonderful and full of fantastic British-ness.

Sound off in the comments section below. The picture: Hot & Spicy? Or Fail?