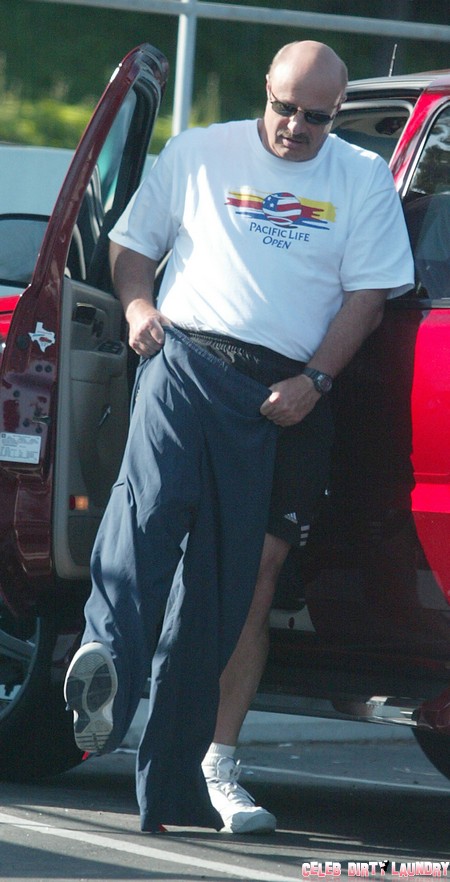 Dr. Phil McGraw is the voice of numerous heartbroken victims, but according to a new National Enquirer report, his vocal decibels have increased in intensity. McGraw’s perky wife, Robin McGraw, is enraged at psychiatry’s one and only quasi-intellectual. According to the report, Robin wants a larger role on his talk show, “and their screaming matches at home have turned their magnificent new mansion into a living hell.” Pardon us if we’re crass, but watching Dr. Phil’s shows have also turned our lives into a living hell – we’re not able to cope anymore with his confusing rhetoric!

A source revealed to National Enquirer, “Since moving Robin into the palatial estate it seems like their marriage is worse than it was before. Phil still is verbally abusive to Robin and is constantly putting her down. They engage in fights and screaming matches. For Robin, it’s like he’s turned the place into her own personal ‘House of Horrors’.” Calm down with the drama there, dear source! The couple recently moved from their old Beverly Hills estate to the extravagant Mediterranean-style mansion. The cash-paid $30 million mansion has not, according to the Enquirer, done their relationship any good. “The location has changed over the past two years, but the story is the same. Phil continues to batter her self-esteem. But Robin is a smart and talented woman, and friends continue to push her to dump him for good,” divulged a source close to the couple. “Phil’s got a likeable on-screen persona, but behind the scenes, TV viewers would not recognize him. With Robin at home, he has an ugly Jekyll-and-Hyde personality.”

Allegedly, the latest marital strife is based on Robin’s eagerness to become more of a fixed figure on the show than mere window dressing. A source at the show explained, “Phil’s ego is sky-high because he’s back on top, and he continues to deny Robin more airtime on the show. Robin is a self-help guru in her own right. She’s published two best-selling books and has taken meetings with studious about hosting her own talk show. But if she doesn’t stay in the spotlight on Phil’s show, her popularity will fade.”

Dr. Phil’s daily talk show witnessed a waning in viewership figures during recent years, but it has been reborn and experienced a surge in popularity for the new season. Dr. Phil’s highly publicized interviews with Dina Lohan and George Zimmerman’s best friend drew the public back to his daytime talk show. His extremely off-kilter tabloid-esque show is currently one of the highest rated shows on the daytime circuit, easily surpassing fellow Oprah Winfrey prodigy, Dr. Oz. There’s still extreme criticism of the show in the modern psychiatric arena, with most psychiatrists and social critics referring to his show as psychiatry’s paranormal science.

We’re inclined to completely disregard the accusations of mentioned spousal abuse, but we don’t like Dr. Phil, nor do we like his celebrity quick-fix methods. He might be a talk show host with a temper, but that is still all he is in the end. He is a distant and scandalous relative of psychology, without any real meat to his bald bones.