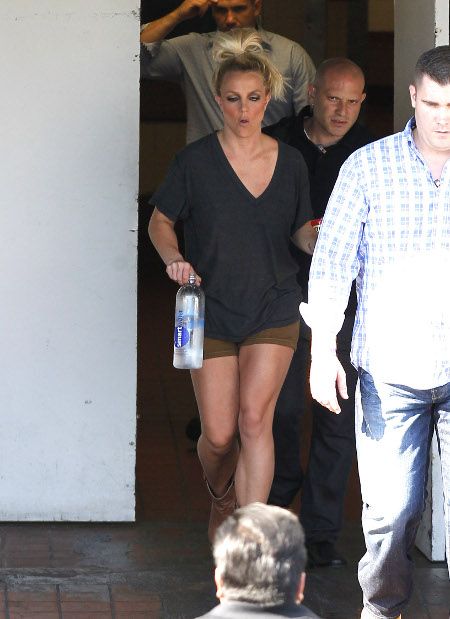 It’s no surprise that crazy, crazy Britney Spears wanted to back out of her $15 million X-Factor contract on the first day of production. The pop princess reportedly wanted to nix her deal with the powerhouse singing competition after experiencing a panic attack while on the set in the beginning days of production. All of this information comes from the big dog, Simon Cowell, himself. And, if we know Simon like we think we do, he’s not going to put up with any more of this blonde drama.

Simon recently phoned into TMZ and said that he and his team told a little white lie a couple months ago when he said that Britney walked off set “just because she had to use the bathroom.” Apparently that wasn’t the full scoop.

“No one is going to admit that on the first day your highest paid star after 20 minutes has walked off set,” Cowell tells TMZ. But Cowell assures the news source that he not only talked Brit Brit into coming back to the judge’s table but created an even better judge in the process. Apparently, she’s doing a fantastic job on the show, and it sounds as if Cowell is sitting pretty with his decision to hire the pop princess. But, let’s be honest here, it’s not like Simon Cowell would ever admit to the fact that one of his ideas was wrong. Would he?

Are you looking forward to seeing Britney Spears and Demi Lovato as judges on The X-Factor? Do you think they’ll do their jobs well? There’s going to be some pretty fierce competition this year not only among contestants but among channels. The Voice, another singing competition, will be dueling for views this fall season, too. Which singing competition will prevail? Let us know which show you’re most excited for in the comments below.