Dreams Will be Fulfilled on Tonight’s Premiere of ‘Opening Act’ on E! (Video) 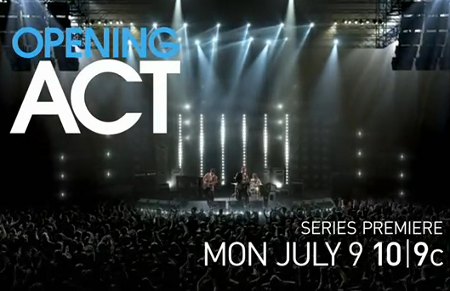 Opening Act, a unique show that promises to help singers realize their dreams by giving them a once-in-a-lifetime opportunity, premieres tonight on E! There are no judges, no competitions, no auditions, and no eliminations — just hardcore talent and raw passion that will propel some of these hidden stars into the spotlight.

Many of you might be rolling your eyes right now at the thought of another singing competition, this one, too, led by fearless producer Nigel Lythgoe; however, this new series is entirely different from the others . . . because it’s really not a singing competition. It’s more like a job offer.

Several of today’s hottest stars, all prominent members of the music scene, scoured the internet looking for singers with the necessary chops to open up for any number of bands/artists, including Nicki Minaj, Rod Stewart, LMFAO, Brad Paisley, Jason Aldean, Jason Mraz, and Gym Class Heroes, among others. How awesome is that? What’s even more fantastic is the fact that the “contestants” have no idea they’re being “judged.” They don’t hear any bad news, only the good. So, while there might be some tears of joy, it doesn’t look like we’ll be able to witness any tears of sadness. Don’t lie, many of you watch these reality shows because you thoroughly enjoy the trainwrecks. Does that make you a bad person? No. Just an honest one.

On tonight’s premiere episode, a girl by the name of Arielle experiences a moment of shock when she walks into a diner and is told that she’ll be opening up for legendary singer Rod Stewart. After she picks her jaw up from off of the floor, she’s surprised even further when she’s told that her Opening Act must be ready in only five days. Oh, snap!

Throughout the season, acts will be chosen to open for superstar headliners during their current world tours, and the show’s host, Olivia Lee, will guide them through the process — everything from helping them pack to giving them encouragement along the way. Stars that will have the pleasure of acquiring these opening acts include several awesome artists:

Opening Act premieres Monday, July 9 at 10:00pm ET/PT, only on E!. Will you check out the show? Let us know in the comments section below?

Take a look at the sneak peek below to see what there’s to look forward to on future episodes.